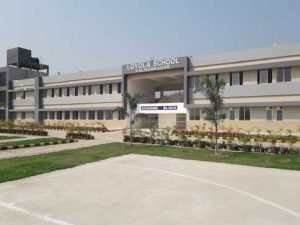 The School campus is spread over 9.96 acres. The two-storey academic building constructed on 1.3 acres has 24 large, airy and well-furnished classrooms, 5 spacious laboratories (Physics, Chemistry, Biology, Computer and English Language), a library with more than two thousand volumes and separate reading area for Junior and Senior students. Besides, the School has a multipurpose hall with a stage, well-furnished offices and separate sick rooms for boys and girls. There are twelve quarters, canteen and book store block in the campus. For promoting sports activities , there is a football field, a basketball court, two badminton courts and a volley ball court. A park with swings, see-saws, slides etc. is also there for children.

Loyola School Kalinganagar follows the ICSE (English Medium) syllabus. While the school has the facility of teaching up to Std-VIII at present, this will go up to Standard XII, going up by one class every year. Currently, there are 14 well-qualified and experienced teachers in the School. For facilitating movement of students from nearby areas, transport facilities are available from Jajpur Road, Brahmanipal and Sukinda areas. Opening of the new campus is expected to promote quality education and would be instrumental in attracting more and more students in the coming years. The Classes from Pre-KG to Standard VIII for the 2019-20 academic session will start in the new campus in Gobarghati from March 18, 2019.

Loyola School Kalinganagar was started in June 2016 with 84 students in play school level in the temporary campus provided by Tata Steel in Plot 2 area. The number of students increased from 84 in 2016 to 180 in 2018. A ground-breaking for the new campus was performed by Mr. Anand Sen, President, TQM & Steel Business, Tata Steel on 22nd January 2016.