Singer Anurag Mohapatra Talks About His Collaboration With ‘Saregama’

Singer Anurag Mohapatra has entered into the bigger game with the remix of ‘Yaad Aa Raha Hai and ‘Janabe Ali’, two classics of past era. The songs have been officially released by Saregama on YouTube. Anurag feels his dream has come true after becoming a part of such evergreen classics. “Of course it is a dream for any singer. I consider myself extremely fortunate to be a part of these cult songs. These are some of the most celebrated songs of all time, especially the evergreen ‘Yaad Aa Raha Hai’. This is completely a surreal moment for me,” shares Anurag while talking about his collaboration with label Saregama.

While narrating the occurrence of the project, Anurag tells, “I was preparing for a series of shows in Singapore when I got a call from Jesse J, a talent manager of repute that there is this series of remixes that Saregama is planning and they are looking for fresh voices. I sent my voice samples and we were waiting, fingers crossed, for their response. Then almost a month after, when I was Singapore I got the call that my voice was shortlisted and I’m doing this one ! I couldn’t control my excitement after all it was a dream project for me. Then I recorded my vocals from Singapore and sent them to the Agency, they forwarded it to the producer and that’s how it was made.”

“It’s not exactly I would consider a remake but it’s more of a remix by renowned DJ Bhediya ! He put his own ideas to the song, gave it a complete new twist and you can head out and listen to what great work he has done,” he adds further. 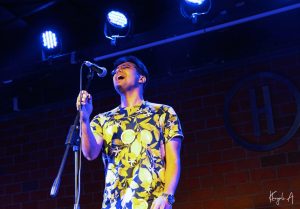 Along with ‘Janabe Ali’, Anurag has another track which is ‘Yaad Aa Raha Hai’ with Saregama.

However, since both original and remake of ‘Janabe Ali’ has been released on label Saregama, Anurag mentions, “Saregama is a dream for every artist taking into consideration the legacy they have as a music label ! It’s completely an honour for me to have done something with Saregama and I waited a very long time for this day to come and now that its here, feels great.
DJ Bhediya is one of the most promising and sought after DJs of present time. Whichever project he works on, he owns it. That is felt when you listen to Janaabe Ali. I look forward to future collaborations with such a talented and inspiring artist.”

Having worked in the remix version of ‘Janabe Ali’, originally sung by Shaan and Kunal Ganjawala, Anurag holds a view on remakes and recreations. He says, “When it comes to remakes and recreations, there’s one thing I would like to mention and that is, we should never try to over-do and deteriorate the original, which was made straight out of heart and soul. A song is an amalgamation of emotions of its creator and that should always be respected and justified by all future generations and artists.”

At the ending note, he mentions about his upcoming projects, saying, “I am doing a lot of Indie projects this year with some esteemed people and musicians. There’s some exciting regional stuff also in the pipeline and we’re pretty sure this is going to be a great comeback year post Covid.”