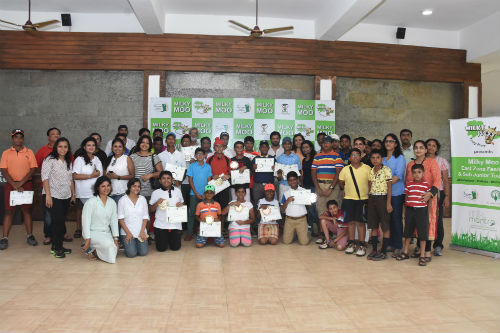 Bhubaneswar, August 12: Overnight leader Samridh Sen raked up a nervous victory at the Milky Moo Odisha Juniors after he carded a nine over 81 second round for a gross of fourteen over 158 to prevail over the competition by two strokes at the Milky Moo Odisha Juniors which was played here at the Par 72 Bhubaneswar Golf Club.
A nervous birdie less round saw Samridh struggle along with the rest of the field as he still managed to bring in the best card of the day along with third placed Aroush Tagore who finished three strokes behind the winner. Splitting them on the leaderboard was Sanu Das, their city mate from Kolkata who ended up with his tournament total of 160.
Aroush though had the Category B title in the bag by a massive fourteen stroke win over Shubham Adak, who finished seventh overall behind Abhikanks Basu in fourth, Pratham Choudhary in fifth and Kaustav Coomar in sixth place.
Young Gurmehr Bindra overturned his three stroke deficit as he took home the Category C title over halfway leader Ramayush Ray after finishing with 168 by five strokes. Ten strokes further behind Ramayush was Rakshik Basu who claimed the bronze medal place.
Category D saw Rishi Biswas coast to a comprehensive win by fourteen strokes after carding a modest 180 for the week after Ahaan Gupta suffered a meltdown in his second round, finishing runners up.
Amongst the girls, local lass Rounaska Jena won the Category A&B combined with Anaahat Bindra taking home the Category D title over Sana Hussain.
Aashrut Almal won the Category E event over local lad Karan Tibarewal.