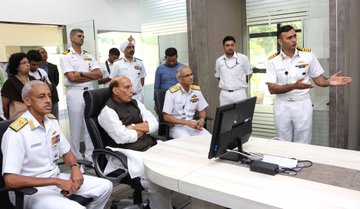 The NMDA project was launched in accordance with the vision of Prime Minister Shri Narendra Modi on SAGAR (Security And Growth for All in the Region). The IMAC monitors movement of more than 120,000 ships a year passing through the Indian Ocean. The cargo carried by these ships account for 66 per cent of world crude oil, 50 per cent of container traffic and 33 per cent of bulk cargo. Thus, IMAC performs a very crucial role in collecting shipping information, analysing traffic patterns and sharing the inputs with the user agencies.

Raksha Mantri was also briefed on the IFC-IOR, which is a collaborative initiative by the Indian Navy in coordination with partner nations and multi-national maritime agencies to enhance Maritime Domain Awareness and Maritime Security. The Centre is likely to host International Liaison Officers from the partner nations in the near future.