Raksha Mantri Shri Rajnath Singh chaired, in New Delhi on January 09, 2023, the Ambassadors’ Roundtable conference for the forthcoming Aero India 2023. The reach-out event, organised by Department of Defence Production, Ministry of Defence, was attended by Ambassadors, High Commissioners, Chargé d’affaires and Defence Attachés of over 80 countries. The Raksha Mantri invited the representatives from across the world to attend Asia’s largest and 14th Aero show – Aero India-2023 – which will be held in Bengaluru, Karnataka between February 13-17, 2023. He urged them to encourage their respective defence and aerospace companies to attend the global event.

The Raksha Mantri described Aero India as a premier global aviation trade fair, which provides an opportunity for the Indian aviation-defence industry, including the aerospace industry, to showcase its products, technologies and solutions to the national decision makers. The five-day show will witness a combination of major aerospace and defence trade exposition, along with aerial displays by the Indian Air Force. “Besides the major entrepreneurs and investors in the defence and aerospace industries, the event will witness participation of prominent defence think-tanks and defence-related bodies from across the world. Aero India will, indeed, provide a unique opportunity for exchange of information, ideas and new technological developments in the aviation industry,” he said.

Recalling the success of Aero India 2021, Shri Rajnath Singh stated that the last edition had witnessed unprecedented attendance of over 600 exhibitors physically and another 108 virtually. He added that the event saw the participation of 63 countries and around 3,000 Business-2-Business meetings were held. He also elaborated on the huge success of DefExpo 2022 which witnessed unparalleled participation of over 1,340 exhibitors, businesses, investors, start-ups, MSMEs, Armed Forces and delegates from several countries. He asserted that the conclusion of 451 Memoranda of Understanding, Transfer of Technology agreements, product launches and orders to domestic businesses, worth Rs 1.5 lakh crore, etc. attest to the success of the DefExpo. The Raksha Mantri hoped for a larger presence of exhibitors and representatives of friendly countries in Aero India-2023and said “We remain committed in supporting the partnerships that have been forged thus far and forming new bonds for future growth.”

Shri Rajnath Singh gave a broad overview of India’s growing defence industrial capabilities, stating that efforts are being made towards enhancing manufacturing capabilities, particularly in the emerging areas of drones, cyber-tech, Artificial Intelligence, radars, etc. He added that a robust defence manufacturing ecosystem has been created which has led to the emergence of India as a leading defence exporter in recent years. The defence exports have grown by eight times in the last five years and now India is exporting to over 75 countries.

“Our large population and abundant skilled work-force has led to the creation of a thriving innovation ecosystem, led by start-ups in high technology areas. These, in turn, are collaborating with the established R&D institutions and industries to develop and manufacture high-end defence platforms and systems at a comparability lower cost,” the Raksha Mantri said, stressing that the Indian aerospace and defence manufacturing sector is well prepared to take up future challenges and capitalise on emerging opportunities. He highlighted that India has domestically produced the Light Combat Aircraft and the manufacturing of Light Utility Helicopter has also commenced. 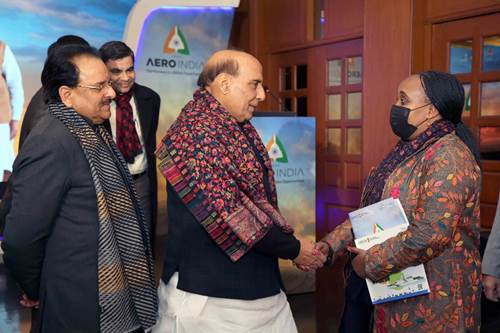 Shri Rajnath Singh emphasised that Government’s efforts towards ‘Make in India’ are neither isolationist nor are they just meant for India alone. “Our self-reliance initiative is the beginning of a new paradigm of partnership with our partner countries. Partnerships are being made with global defence industry giants. Recently, we signed a contract for manufacture of C-295 aircraft for the Indian Air Force through collaboration between Tata Advanced Systems Limited and Airbus Defence and Space S.A., Spain. ‘Make in India’ encompasses ‘Make for the World’. It translates into an open offer to all for joint efforts and partnerships in defence R&D and production,” he said.

The Raksha Mantri termed ‘partnership’ and ‘joint efforts’ as the two keywords that differentiate India’s defence industry partnership with other nations. He reiterated that India does not believe in a hierarchical conception of world order, where few countries are considered superior to others. “India’s international relations are guided by the very essence of human equality and dignity which is a part of our ancient ethos. We do not believe in making or becoming a client or satellite state, and so, when we partner with any nation, it is on the basis of sovereign equality and mutual respect. Forging relations comes naturally to India, as we work towards our cherished goal of a secure and prosperous world,” he said.

Shri Rajnath Singh described it as the Government’s endeavour to transcend the relation of buyer and seller to that of co-development and co-production model, irrespective of India being a buyer or a seller. “We are a major defence buyer as well as a significant defence exporter. When we are procuring defence equipment from our valued partner nations, very often they share the technical know-how, set up manufacturing plants in India and work with our local firms for various sub-systems. And when we export our defence equipment, we offer our full support towards the capability development of the buyer through sharing of technology, training, co-production etc.,” he said.

The Raksha Mantri added that India offers a partnership that comes with a variety of options, that are accommodative of national priorities and capacities. “We want to build with you, we want to launch with you and we want to create with you. There is an old African proverb ‘If you want to go fast, go alone. If you want to go far, go together’. We intend to go far and we want to do it together. We wish to create symbiotic relationships, where we can learn from each other, grow together and create a win-win situation for all. That is exactly the way international relations should be transacted. Cooperation is a defining trait of the common human heritage, which we all share. VasudhaivaKutumbakam, which finds mention in Maha Upanishad and is further referred to in the Hitopadesha and other literary works of India unequivocally propounds the idea that ‘The Whole World is One Family’,” he said.

Sharing his views on India’s G20 presidency, Shri Rajnath Singh stated that the upcoming summit is taking place in the larger context of a major geopolitical crisis, food and energy security concerns, comparatively slower progress on Sustainable Development Goals, mounting public debt burdens and urgent climate change related issues. He voiced India’s endeavour to build a consensus within the G20 and shape the agenda for a more secure, prosperous, sustainable and just world. As the Chair, India will showcase its 3-Ds to the world – Development, Democracy and Diversity.

In his welcome remarks, Defence Secretary Shri Giridhar Aramane stated that India is fast-emerging itself as an aerospace and defence manufacturing hub where the world looks for innovative solutions. He said, Aero India 2023 will provide an opportunity for exhibitors and participants to exchange ideas and forge collaborations to fulfil their quest to achieve excellence in aerospace and defence manufacturing.

During the Ambassadors’ conference, a detailed overview of Aero India 2023 was given to the representatives. The five-day event, with the theme ‘The runway to a billion opportunities’, will be organised at Air Force Station, Yelahanka in a total area of over 1.08 lakh sqm. As on date, over 645 exhibitors have registered for the event, with 80 countries confirming their participation. The marquee events include Defence Ministers’ Conclave ‘SPEED’ and a CEOs Roundtable.

India’s agricultural and processed food products exports up by 13% to USD 19.69…