Rajeev Chandrasekhar engages with the Indian Diaspora in Dubai

New Delhi : The Union Minister of State for Electronics & IT and Skill Development & Entrepreneurship, Shri Rajeev Chandrasekhar has said that India today is a beacon of growth for the world, made possible by a vibrant leadership and bold reforms that has turned the earlier narrative of India being a dysfunctional democracy on its head. Addressing the Indian diaspora at the Vishwa Sadhbhavana event on Saturday in Dubai, UAE, Shri Rajeev Chandrasekhar said, “India is now at an inflection point. From where we are today, in the coming 25 years of Amrit Kaal, India can go only forward and that would be the natural next point in its development journey.”

Reaffirming that Prime Minister, Shri Narendra Modi’s leadership, extensive reforms, and the success of the Government’s flagship programmes like Digital India, Skills India, Start-up India etc, have changed India’s earlier narrative of a leaky, dysfunctional democracy, the Minister said that India today is a “living and breathing example” of a country that is not only plural, secular and diverse but also one that stands for Economic development, innovation, growth and prosperity.

At the programme, where members of the Indian diaspora were present in huge numbers, Shri Chandrasekhar also launched two books about the impact of 20 years of leadership of PM Narendra Modi ‘[email protected]: Dreams Meet Delivery’ & ‘Heartfelt: The Legacy of Faith’. The event was organised by the NID Foundation. 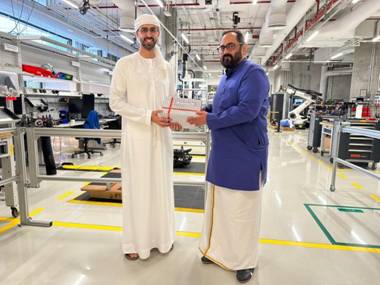 The Minister, who was on a day-long trip to Dubai, had earlier held a meeting with Mr. Omar Sultan Al Olama, UAE Minister of State for Artificial Intelligence, Digital Economy & Remote Work Applications. Shri Chandrasekhar shared with him PM Shri Narendra Modi’s vision of New India and discussed the possibilities of cooperation between the two countries, especially in the field of deep tech, artificial intelligence, electronics and semiconductors.

The Minister also visited Ajman, UAE to attend the Deepotsav 2022 event organised by the Indian People’s Forum (IPF) UAE Uttar Pradesh Council. In his address to the members of the diaspora there, Shri Rajeev Chandrasekhar spoke about various initiatives taken by the Prime Minister for transforming New India with reimagined ambitions, to achieve the target of One Trillion USD Digital economy/ 5T USD Economy by 2026.