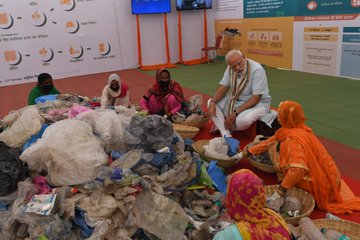 New Delhi: The Prime Minister, Shri Narendra Modi launched Swachhata Hi Seva (SHS) 2019, a massive countrywide awareness and mobilization campaign on Swachhata at Mathura today. SHS 2019, with special focus on ‘plastic waste awareness and management’ is being organized from 11th September to October 2nd 2019, as the Swachh Bharat Mission (SBM) is poised to dedicate an ODF India to Mahatma Gandhi on his 150th birth anniversary. The launch of SHS was organized jointly by the central Departments of Animal Husbandry and Dairying and Drinking Water and Sanitation and the Government of Uttar Pradesh.

The Prime Minister also visited the Pashudhan Arogya Vigyan Mela, where he saw cows being operated upon to remove plastic waste from their stomachs. He then interacted with a group of women from Uttar Pradesh who segregate plastic waste into recyclables and non-recyclables, and in a unique gesture, also participated in the segregation activity himself.

Addressing an audience of about 20,000 farmers, sarpanches, women groups and swachhagrahis, the Prime Minister urged all citizens to free their houses, offices and work space from single use plastic. Drawing people’s attention to the hazardous effects of such plastic for the environment, and for the health of animals and aquatic life, he reiterated his appeal to use cloth or jute bags while going out for shopping and to use metal or earthen glasses for serving water in offices. He asked people to collect all the plastic waste from their surroundings at an identified place and to ensure its safe disposal with the support of the local administration during the Swachhata Hi Seva.

Addressing the gathering, Chief Minister of Uttar Pradesh, Shri Yogi Adityanath applauded the positive impacts of the SBM and highlighted the contribution of SBM in dealing with the menace of deadly disease Encephalitis in eastern UP. He added that the significant increase in the sanitation coverage under SBM will now be leveraged for achieving the goal of plastic waste free India on the lines of ODF India.

Speaking on the occasion, Shri Gajendra Singh Shekhawat, Union Minister of Jal Shakti said that the entire world is eagerly waiting for the day when India becomes ODF. He said that the SHS 2019 campaign would give a big boost to generate mass awareness on plastic waste and its subsequent collection, recycling and disposal, and will be a new Jan Andolan for protecting environment under the inspiring leadership of the Prime Minister.

This year’s Swachhata Hi Seva will see mass awareness generation activities on plastic waste management between 11th September to 1st October, nationwide Shramdaan for plastic waste collection and segregation on 2nd October, and recycling and effective disposal of the collected plastic waste from 3rd October to Diwali, 27th October 2019. The Prime Minister has also written personal letters to all Sarpanches and Swachhagrahis, motivating them make the Swachhata Hi Seva 2019 a grand success. These letters were read out today at special Gram Sabhas across the country.