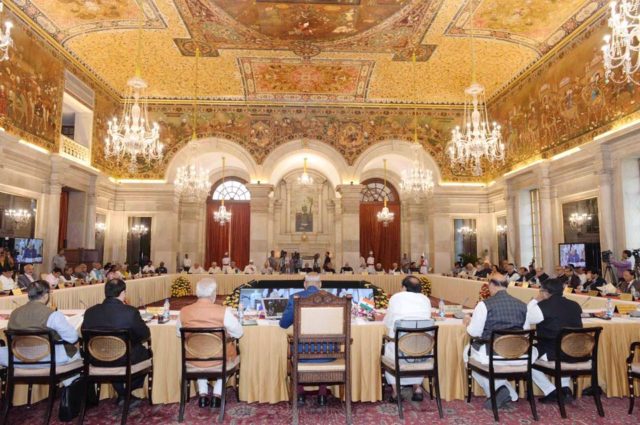 New Delhi: President of India, Shri Ram NathKovind, opened the 48th Conference of Governors at Rashtrapati Bhavan today (October 12, 2017). The Conference is being attended by Twenty-seven Governors and three Lt. Governors of States and Union Territories. The Administrators of the UTs of Dadra and Nagar Haveli & Daman and Diu as well as of Lakshadweep are also participating in the Conference as special invitees.

In his opening address, the President said that by participating in this Conference, Governors and Lt. Governors get a good opportunity to discuss important issues and share experiences from their respective States. He stated that Governors play the role of a bridge between the Union Government and States. The obligation of Governors to preserve and uphold the Constitution and commit themselves to the service and welfare of the people is even more pronounced in the current paradigm of Co-operative Federalism.

The President said critical milestones and national goals have been set in the context of the completion of 75 years of independence in 2022. This period is only five years away, and the Government of India has resolved to build a society that is safe and secure, prosperous, ensures opportunity for all, and is a leader in science and technology. Given the magnitude of this task, it is necessary that the entire country works unitedly and is on the same page. The five years from 2017 to 2022 are devoted to the creation of New India, one free of corruption, poverty, illiteracy, malnutrition and unhygienic conditions. Simultaneously, a strong foundation will also be laid for the coming generations. In order to ensure ‘Team India’ advances in a single direction to achieve these national goals, Governors should inspire and connect all relevant stakeholders in their respective States.

The President said that it is essential to link youth with the process of nation building. The future of the country depends on the capacities, moral values and compassion of the younger generation. Special attention needs to be paid to higher education and skill development at the level of States. This is particularly true given the challenges of automation and Artificial Intelligence. The President pointed out that 69 per cent of Universities in the country fall under the purview of State Governments, and 94 per cent of all college and university students study in these institutions.

The President said technology can propel us to reach even difficult and long-term goals, and help ensure access to quality public services for all citizens. He also stressed trusting citizens more and gave the examples of self-attestation of documents by individuals and the easier mechanism for obtaining a passport. He urged the replication of these ideas at the level of States, since much of citizen’s interaction with Government agencies is at the level of States.

The President said that being an intrinsic part of the legislative system in their States, Governors can provide a new dimension to the development of their States by communicating with legislators, and inviting them to Raj Bhavan to deliberate on subjects related to public well-being. By establishing communication with University Chancellors and Vice-Chancellors, academicians, social workers and other thoughtful and enlightened citizens in the States, Governors could help raise the quality of discussion and debate and provide an impetus to society and the State government.

The President concluded by expressing hope that this Conference could help the Union Government and the States work together in the interests of all citizens, especially young people. The dream of a developed India will be realised, he said, only when every State develops.

The two-day Conference will deliberate on distinct agenda items in different sessions. The theme of the opening session was ‘New India-2022’. The first session of the Conference was addressed by Prime Minister of India, Shri Narendra Modi.There was also a presentation by Dr Rajiv Kumar, Vice-Chairman of NITI Aayog, on the elements of ‘New India 2022’.

The second session is on the subjects of ‘Higher Education in States’ and ‘Skill Development and Entrepreneurship to Make Youth Employable’. In the third session, to take place on October 13, 2017, Governors will make brief remarks on any special issues pertaining to their respective States/Union Territories. In the concluding session, a brief report on the deliberations will be presented by the respective conveners.