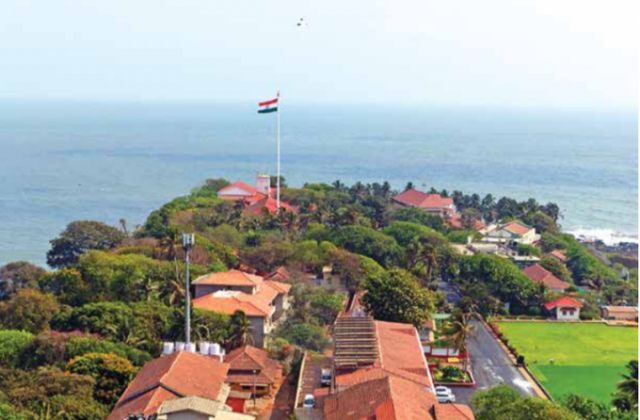 Mumbai: The Honourable President of India Shri Ram Nath Kovind will be inaugurating the Bunker Museum at Mumbai’s sea-facing Raj Bhavan tomorrow, during his two-day visit to Mumbai during August 17 – 18, 2019.

The President of India will also unveil the plaque to mark the completion of restoration of the twin cannons which were unearthed from the foothills of Raj Bhavan last year.

During his visit, the President will also inaugurate the new Presidential Guest House ‘Jal Kiran’ at Raj Bhavan and perform the Bhoomipujan for the reconstruction of the Governor’s new office-cum-residence ‘Jal Bhushan’.

The thematic underground bunker museum spread over an area of 15,000 sq.ft. will be opened for the general public through prior online booking later during the year.

The Bunker Museum has Virtual Reality Booths in which visitors can time-travel to the 19th century, when the bunker was constructed to fire cannons at approaching enemy ships. The history of Raj Bhavan has also been depicted in another section.

Cannon Plaque to be Unveiled

The President will unveil the plaque in front of the restored and refurbished twin cannons at Raj Bhavan on Saturday, 17th August 2019.

The twin cannons, each weighing 22 tonnes belonging to the pre – World War I era, were discovered last year in a neglected state at the foothills of Raj Bhavan.

The same have been restored and installed in front of the Jal Vihar (Banquet Hall) in Raj Bhavan.

The President will unveil the renovated guest house ‘Jal Kiran’ by cutting the ribbon on Saturday, 17th August. The Guest House will serve as the accommodation for the President of India and the Prime Minister of India during their visits to Mumbai.

To Lay the Foundation Stone of Governor’s New Residence

The President of India will also perform the Bhoomipoojan of the proposed new ‘Jal Bhushan’ building which will house the Governor’s office and residence, on Sunday, 18th August 2019.

The underground British-era bunker was discovered by Governor CH. Vidyasagar Rao in August 2016. Having remained closed for nearly six decades, the bunker had suffered extensive wear and tear due to seepage from the overhead lawn.

As the bunker is part of the history and heritage of Raj Bhavan and also because a part of it lies below ‘Jal Bhushan’ the office and residence of Governor, there was a need to conserve the bunker in a way in which it did not compromise the safety of the building and at the same time provided an opportunity to people to visit the historic site.

The bunker has 13 rooms of different sizes. It opens with a 20-ft tall majestic gate. Towards the entrance, the structure resembles a fort. When opened, the bunker had rooms bearing names such as Shell Store, Gun Shell, Cartridge Store, Shell Lift, Pump, Central Artillery Store, Workshop, etc. The entire underground bunker was found to have a proper drainage system and inlets for fresh air and light.

While taking up the Conservation works, it was ensured that all the original features of the bunker are restored and also it is developed for adaptive reuse as a museum by incorporating virtual reality on the themes of Cannon-firing experience, history of Raj Bhavan and a glimpse of the forts of Maharashtra.

Dioramas of cannons and soldiers, optical illusions of a bunker of infinite length and cannons have also been created for the museum.

The discovery of two identical cannons in the Mumbai Raj Bhavan estate has further added to its historicity. Dating to the pre-World War I era, the cannons – 4.7 metre in length and 1.15 metre in diameter – were found under mud, 25 metres apart from each other, in the foothills of the Raj Bhavan promontory.

The cannons, believed to have belonged to the battery near the coast as part of the defence of Bombay Castle from naval attacks, were first spotted by Raj Bhavan staff members during a tree plantation drive.

On November 3, 2018, in a 12-hour operation undertaken at the instance of Governor CH. Vidyasagar Rao, cranes extricated the ancient weaponry that had got buried underground with the passage of time.

The twins, each weighing 22 tonnes, were then lifted on to the Helipad Lawn and placed there until their restoration in front of the Jal Vihar, the monumental banquet hall.

Known all along only as an annex to the adjoining Flagstaff Bungalow, ‘Jal Kiran’ guest house has been completely renovated and upgraded recently.

The VVIP Guest House will have four suites including the one for the President of India and the Prime Minister. The VVIP suite comprises a meeting hall, a drawing room and a sea-facing balcony.

Jal Bhushan, the office and residence of the Governor of Maharashtra, has a history of nearly 200 years. The House has undergone several modifications and renovations. Jal Bhushan has been the official residence of the British Governors since 1885 and Indian Governors after Independence. It has evolved around the original ‘Pretty Cottage’ built by Governor Mountstuart Elphinstone around 1820.

Having completed its lifespan and pronounced structurally unsafe, the existing ‘Jal Bhushan’ building is set to be demolished and a New Jal Bhushan building is being built at the same site. The new building will retain many of the distinctive features of the existing heritage structure.

Apart from serving as the office and residence of the Governor, ‘Jal Bhushan’ also has a Conference Room, a Meeting Room, a Dining Room and offices of the Secretary to Governor, ADC, Private Secretary and PRO to the Governor.