For bestowing qualitative services in their respective fields, five distinguished dignitaries namely Smt. Manashi Pradhan, Shri Jagannath Panda, Shri Adwaita Gadanayak, Dr. Ashok Choudhary and Shri R N Mohanty from Odisha were being felicitated by PNV Foundation for a noble cause. In this mechanism of honoring great icons, PNV Foundation also felicitated Indian Ace sprinter Dutee Chand, who has been named in India Today’s 50 most powerful people in India this year. Dutee Chand won two silver medals at the 2018 Asian Games and also won gold at the 2019 World Unversiade. With the gold, Dutee Chand became the second Indian sprinter ever to do so at a global event for which Indian English Magazine India Today placed her at 47th rank in the list of 50 most powerful people in India this year.

Smt. Manasi Pradhan is an Indian women’s rights activist and author. She is the founder of Honour for Women National Campaign, a nationwide movement to end violence against women in India. In 2014, she was conferred with Rani Laskhmibai Stree Shakti Puraskar by the President of India. For her dedication towards the society, PNV Foundation nominated her for the felicitation.

In his detailed mixed-media paintings, drawings, and sculptures, Shri Jagannath Panda mixes mythology with reality, and motifs from traditional Indian art with images from Western and Indian contemporary culture, to explore the effects of globalization and rapid development on his country. Panda illustrates the paradoxes inherent in India’s burgeoning development and prosperity and the profound destruction—of the environment, human beings, and traditional culture—caused by modernization. He was being awarded for his proficiency in the fields of Art & Culture. 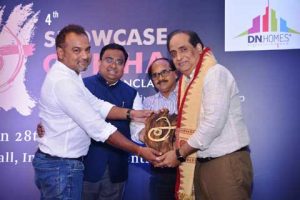 Shri Adwaita Gadanayak is the Director General of National Gallery of Modern Art. His sculptures carry a heavy scent of spirituality and culture, which he associates with his upbringing amidst nature in Odisha. He has created the National Police Memorial’s central structure. Back in his hometown, which is in the heart of a jungle in Dhenkanal, he was just another man who found shape and form in all elements of nature. PNV Foundation felicitated him for his lively sculptural architect.

Dr. Ashok Choudhary is working as Associate Professor in the Department of Hepatology and Liver Transplant at Institute of Liver and Biliary Sciences (ILBS), New Delhi. For his predominant work, he received the prestigious Best fellow research award by American Association of Liver Disease (AASLD) in 2014 at Boston and young investigator by European Association for Study of Liver (EASL) in 2014 at London. PNV Foundation felicitated him for his outstanding works in Liver Transplant.

Shri R N Mohanty is currently the CEO of Sightsavers India, with more than 25 years of illustrious service in the development sector behind him. Before moving into Sightsavers Mr. Mohanty was the Chief Operating Officer of CARE India. He was being felicitated for his extreme developmental works.

For organizing such glorious award winning ceremony, Founder of PNV Group Shri Satyabrat Sanu Ratho gave his heartfelt thanks to each and everyone who made it a grand success. He further said, “We are here to showcase the talents of Odisha and felicitate the icons and inspirations for the next generation.” Address the gathering Chairman of OFDC & Co-Convener of Showcase Odisha Awards & Conclave Shri Tripathy said, “We Odias have to be ready now to package ourselves as the identities of Odisha and be proud to tell that we are Odias.”

PNV Foundation is a non-profit organization that carries different types of CSR activities and initiatives for the welfare of the society to ensure sustainable development. PNV Foundation has been an essential unit of the PNV group, which is an established group of 360-degree media and entertainment, ad pr and event management companies. Our huge clientele base and networking have been our strength that has made our CSR initiatives effective. PNV Foundation is strongly driven by international benchmarks for sustainable development. The ultimate goal is to create a sustainable improved quality of life for communities and its people.