Bhubaneswar: Prime Minister Narendra Modi said that the Centre has never neglected Odisha; it has provided Rs 3 lakh crore in the past 5 years which is 5 times compared to earlier . He said this while adressing a rally at Bhubaneswar:

BJD government is being run by a coterie & the state’s development has been stalled by the BJD govt for PC (percentage commission) says PM Narendra Modi in Bhubaneswar . 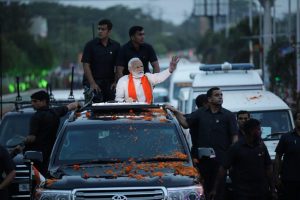 Prime Minister Narendra Modi launched a scathing attack on the Odisha government over the alleged murder of BJP worker Manguli Jena in Khurda town. He accused the BJD government for rise in “goondaraj” in the State.