“A strong India is good for Japan and a strong Japan is good for India,” said Mr Abe after the two leaders laid the foundation stone for the project at the Sabarmati station. He spoke in Japanese but began with “Namaskar” and ended his speech with a “Dhanyawad.” Japan PM Shinzo Abe says Indo-Japan partnership is special, strategic and global. 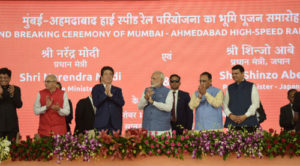 The Rs. 1.1 lakh crore bullet train project is a joint venture between the Indian Railways and Japanese firm Shinkansen Technology. The Japanese team estimated that the first train would roll out by 2023, but Railways Minister Piyush Goyal said PM Modi wants the train to start on 15 August 2022 – when India completes 75 years of Independence.