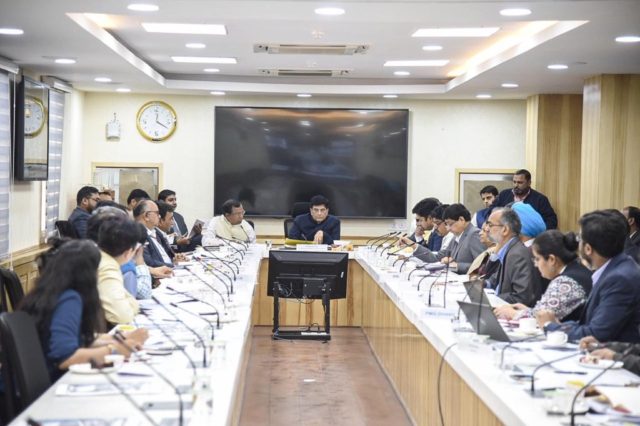 New Delhi: Minister of Railways and Commerce & Industry, Shri Piyush Goyal chaired a meeting for the review of 17 large-size infrastructure projects on 27th of February in Department of Promotion of Industry and Internal Trade (DPIIT), New Delhi. The meeting was attended by Shri Som Prakash, Minister of State for commerce and industry, senior officers of DPIIT, Chief Secretaries of Karnataka and Maharashtra, and senior officers of Jharkhand, Odisha, and Uttar Pradesh (through Video Conference). Senior officials of key ministries including Railways, Power, Petroleum and Natural Gas, Road Transport and Highways as well as Invest India were also present to address the issues raised through the Project Monitoring Group (PMG).

Project Monitoring Group (PMG) is an institutional mechanism of DPIIT to expedite resolution of issues and removal of regulatory bottlenecks in projects, with investments upward of ₹ 500 crores in India. Invest India provides implementational support to PMG in identifying and following up on issues with the States. PMG enlists unresolved project issues of all Public, Private and ‘Public–Private Partnership’ (PPP) projects and undertakes fast-tracking of approvals, sectoral policy issues and removal of bottlenecks for expeditious commissioning. It has till date resolved more than 3500 issues in 809 projects and has unlocked anticipated financial investment of more than ₹ 32 lakh crores. At the moment, PMG and Invest India are handling 588 issues in 260 projects, with total anticipated investment of ₹10 lakh crore.

In the meeting, Ministers and senior officials assessed critical projects, with important socio-economic and industrial significance. A total of 36 issues in 17 projects with total anticipated investment of ₹ 32,910 crores were reviewed. Among them, a few are as follows:

BPCL’s Petroleum and Petrochemical projects in Rasayani, Maharashtra: With an anticipated investment of ₹ 7000 crore, this project is critical for BPCL’s plan to grow its petrochemical business from its current 1% of portfolio to 15%. This project will reduce import dependency of petrochemicals and boost growth of associated ancillary setups and industries.
Four-laning of Govindpur (Rajganj)- Chas – West Bengal Border Section [NH-32]: This railway project has industrial significance as it passes through coal mining hub of Dhanbad and the steel city of Bokaro.
Implementation of Transmission Systems in Jharkhand Consisting of 400/220/132/33 kV Transmission Lines and Substation: This project of ₹ 1800 crores is necessary to feed power in deficit load centres for economic and social growth in Jharkhand.
Londa – Miraj Doubling Project: With an anticipated investment of ₹ 2436 crore, this 280 km railway line was announced by the Hon’ble Prime Minister in 2017 to generate new avenues for business in western Maharashtra.
Actionable directions and timelines were issued for the expeditious resolution of pending issues in all projects. Shri Piyush Goyal emphasised the importance of setting up additional transmission lines for power projects in the expanding city of Bangalore where power deficits had arisen earlier due to lack of infrastructure, given high land prices for erecting new infrastructure.

Shri Piyush Goyal also directed the Railways to prioritise investments in projects where the state provides for 100% land acquisition. He also called on States to review and prioritise their Railway projects while giving due importance to freight, keeping in mind economic development priorities of the state. He also suggested to disburse funds through letters of credit to optimally utilise working capital. He also directed all the States and MoEF & CC to consider the use of technology in tree transplantation to avoid tree cutting. He asked Addl. DGF, MoEF & CC to provide a concept paper on best technologies available for tree transplantation, keeping in mind the efforts already made by the States and MoEF & CC in this regard.

The minister called for more Ministries and States to upload their projects across sectors including defence to be taken up by PMG. He also directed ACS (Revenue) Uttar Pradesh to review all Memorandums of Understanding (MoUs) signed during investment summit and analyse if the MoUs have begun to translate into investments. He appreciated the contribution of Invest India, PMG, State Governments and DPIIT in taking up issues of large infrastructure projects with various states and expressed the hope that all stakeholders would monitor the progress closely and would unlock more of such investments by putting their projects on fast-track mode.