This is the first-of-its-kind initiative taken up by any corporate to promote solar chulha in order to reach out to the last mile of the society. The genesis of the challenge lay in the Hon’ble Prime Minister’s call given to ONGC to foster the development of ‘Efficient Electric Chulha (Stove)’ that can provide smoke-free kitchen to the mothers in each and every part of the country, while inaugurating ONGC’s Corporate Office Deendayal Urja Bhawan in September 2017. “This innovation would significantly impact the nation’s dependence on imported fuel in one stroke”, the PM had said.

Mr Shashi Shanker, CMD ONGC steered the initiative to realise the vision of Hon’ble Prime Minister to make clean cooking alternatives available to the commonest of common citizens of the country. 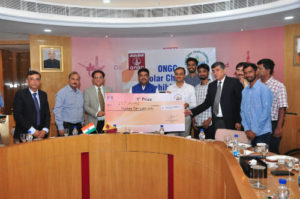 Five finalist teams of the ONGC Solar Chulha Challenge, representing both academia as well as industry, displayed their functional solar chulha prototypes in the exhibition. Mr Pradhan visited the stall and interacted with the participants to understand the technology and showed keen interest in the innovations that the participants exhibited.

After the visit, the minister held a detailed review of the initiative to transform it into a nation-wide movement. “Efforts should be made to improvise the technology further and make it available at affordable cost”, he said. He emphasized to develop integrated solar systems which can provide multi-purpose utility. Mr Pradhan also felicitated the winners of the Solar Chulha Challenge.

The ONGC Solar Chulha challenge had received an overwhelming response with over 1500 applications. An Expert Panel of Scientists & Industry Experts headed by Dr Anil Kakodkar, Former Chairman, Atomic Energy Commission evaluated the applications. Thirteen applications were shortlisted by the panel during their 1st meeting on 6th January 2018. These teams were then invited to present their proposals to the Expert Panel during its 2nd Meeting on 24 February 2018 at Mumbai, after which the panel selected the finalists with proposals from both Solar Photovoltaic and Solar Thermal based systems.

To promote this national endeavour, ONGC may also provide monetary support to manufacture about 1000 units and further procure these 1000 units for demonstration in different regions across the nation, through its Rs 100 crore ONGC Startup Fund that that is aimed at fostering, nurturing and incubating new ideas related to the energy sector.

PM lays foundation stone and dedicates various projects worth over Rs 6,900 cr in…