Mumbai: 30th May: The Baya Weaver Count organized by BNHS last year reported 6354 individuals of this gregarious, sparrow size species. Odisha topped the count followed by other states where participants recorded Baya Weavers on two consecutive Sundays. This year, the pan-India Baya Weaver Count is set to be held throughout next week from 4thto 11th June 2017.

Baya Weaver Count 2016 Results:
The count concluded with a record of 6354 Baya Weavers. Observations were recorded by birdwatchers from 18 states of India including Maharashtra, Karnataka, Rajasthan, Assam, Goa, Odisha, Gujarat, Haryana, Uttarakhand, Chhattisgarh to mention a few. A total of 3401 nests were spotted across the region.

Know the Weavers
India is home to four species of weaver birds or bayas: Baya Weaver (Common Baya or Indian Weaver); Streaked Weaver; Black-breasted Weaver (Black-throated Weaver) and Finn’s Weaver (Finn’s Baya or Yellow Weaver). This is the species with suspended pendulous nests built in colonies, usually above water, feeding on grains, seeds and insects, and having a high-pitched voice. Breeding colonies are very noisy with lot of activity, some males bringing nesting material, while others weaving thin threads into retort-shaped structures. The Baya has a polygamous breeding system i.e. one male has many females as mates, not necessarily at the same time. During breeding season between April and August, the Baya males acquire a distinctive yellow breeding plumage. All Indian weaver bird species are protected and listed in Schedule IV of the Wildlife (Protection) Act, 1972. 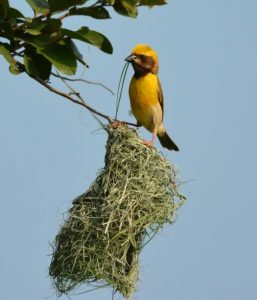 Go Counting
BNHS, under Common Bird Monitoring Programme (CBMP), a citizen science initiative has organized this week long count to involve common people in bird monitoring and gathering data. The participants can select any location of their choice and record the sightings of Baya Weavers. The collected data should be reported to us in an excel spreadsheet available on http://ibcn.in/?page_id=71.

What: Count Baya Weavers
When: 4th – 11th June 2017
Who: Anyone with an interest in birds! This is a great opportunity to introduce your family and friends to the wonderful world of birds.
How to participate:
(1) Select a site and go for bird watching
(2) Record the sightings of Baya Weavers in your chosen location
(3) Send us your records along with photographs on [email protected]
For further details: Contact Mr. Nandkishor Dudhe on [email protected] / 7620193207 or Mr. Omkar Joshi on [email protected] / 9768171322