Odisha emerges as a top manufacturing destination in India

Bhubaneswar: Ahead of the forthcoming Make in Odisha Conclave 2018, Odisha’s investment promotion efforts have resulted in the State emerging as a top manufacturing destination in India. In the 72nd Survey of Projects Investment in India conducted by Projects Today magazine, Odisha has topped in terms of fresh projects expenditure by contributing almost 12% of the total fresh projects announced in the July – September period (Q2) of current fiscal. The state attracted manufacturing investments from a variety of sectors to the tune of INR 35,861 crore in the second quarter of this fiscal alone. 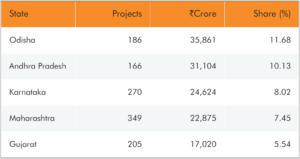 Commenting on the development, Sanjeev Chopra, Principal Secretary, Industries said, “We are happy to note that Odisha’s investment promotion efforts over the past couple of years have resulted in the State emerging as one of the topmost destinations for manufacturing investments in the country. The domestic and foreign investors’ meets organized by the State government under the guidance of Hon’ble Chief Minister have received very encouraging response. The industry-friendly GO-SWIFT portal recently received the 400th investment proposal in a short span of 10 months. The latest ranking of Odisha by Projects Today is another accolade that would encourage us to strive further in our pursuit of making Odisha the manufacturing hub of Eastern India.”

Over the past few years, many initiatives have been taken by Odisha to enhance investment promotion preparedness. These include institutionalizing State Level Facilitation Cell, appointment of sector-specific nodal officers to handhold investors, identification of 6 focus sectors, regular domestic and international investor outreach through roadshows in addition to a focused approach to facilitating investments through technology-enabled interventions like Government of Odisha – Single Window Portal for Investor Facilitation and Tracking (GO-SWIFT).

Odisha’s investor-friendly policies and the development of world-class infrastructure have received very positive feedback from investors across the country as we have been able to create an ideal business ecosystem for various sectors to flourish in the state. We have seen a significant rise in attracting manufacturing projects with more than 118 large projects approved with employment potential of 1,28,572 in the past 4 years alone in the State. The average time taken for approval of the projects is also reduced to 20 days from the date of receipt of completed project application. Odisha has registered a GSDP growth rate of 7.94 percent in 2016-17, surpassing the national growth rate of 7.1 percent.