Odisha Divas at Kotia in Koraput

We are blessed because we have Koraput which is the wonderland of India and is the resource capital – treasure below soil and Lord Jagannath above. Koraput and its people reflect Odisha in many ways – their naivety, comity, and divine simplicity. The world is coming to Koraput – for gold, platinum, manganese, bauxite, graphite and limestone. We need to have our plans for responsible use of the resources and concomitant development of the people. Any industrialisation, irrespective of the quantum,  is counterproductive, without the development of the people.

The abundance of the entire area has lured Andhra Pradesh to slowly, steadily and systematically establish control of 21 villages in Kotia Panchayat, of Pottangi. This ‘annexation’ has not happened overnight. The AP government is doing the following in the area and we are clueless or unfazed:

The civil society of Odisha is in a deep slumber while AP is on an overdrive to snatch away Kotia panchayat from under our nose. The district authorities are not informed about these developments ( at least they claim so) and if they are not then that itself should be taken as a major laxity endangering the existence of the habitations and the people. How are we even accepting these ridiculous alibis?

Kotia Panchayat has always been a part of Odisha, as it was in the erstwhile Jeypore estate. During the state formation in 1936, Government of India issued an order which was published in The Gazette of India, on 19th March 1936, vide no. F. 20/35 G(B). This order mentions (in the First Schedule, Part-I, Sl. No. 2(iv)) that the areas under the then new Province of Odisha, shall comprise of “the following areas in the Vizagapatnam district, that is to say, the Jeypore (Impartible) Estate and so much of the Pottangi Taluk as is not included in that estate.”

During the formation of Odisha state, which was on linguistic basis, a survey was undertaken in three states – Bihar, MP and Odisha to identify and demarcate the revenue villages and the territories. Surprisingly only seven villages of Kotia Gram Panchayat (Pottangi block), like Turia, Barabandha, Talakanti, Gumelpadara, Mathalamba, Suliamari, and Katraguda were recorded as the revenue villages and since then revenue has been collected by the State. 21 villages are left out as Kotia Gram Panchayat consists of a total of 28 revenue villages. I have spoken to many bureaucrats, local peer leaders and the civil society at large but haven’t got any plausible answer to the great faux pas. I would like to believe that it was truly, only a faux pas an no inter-state geo-political machination.

Odisha, it seems has woken up to the ingression and has started its activities to instil faith and belongingness in the Kotia Panchayat people in their state and the administration. Last month the area received mobile connectivity, but the internet (data) connectivity so far, is patchy. Surprisingly the connectivity gets activated only when there are official visits or important meetings in the area. I am sure our outreach would improve and be targeted directly at the people who unfortunately feel unmoored. AP is organising community meetings, distributing solar lights, blankets and strengthening its strategic penetration into the Panchayat.

The population of the panchayat area is slightly more than 8100 and Odisha has embarked upon a timeline-based area development plan for the Kotia Panchayat. With an immediate outlay of about Rs 60 Cr the infrastructure at Kotia would be strengthened and that includes  roads, bridge, hospital, schools. The deadline for all the work to be completed, in the first phase in 31st March, 2020, which is about three years after the announcement of the government in April 2018 of a special package for Kotia Panchayat development.

The Panchayat should be able to use a 10-bed hospital, a 300-seater hostel for tribal boys and a 200-seater hostel for tribal girls, cluster houses for low income communities under Biju Pucca Ghar Yojana, community centres in 5 villages (as the cluster community hubs), roads in the Panchayat hinterlands and much better connectivity to the panchayat, block and the district headquarters. An inter departmental committee on Kotia GP, chaired by the Chief Administrator, KBK, has been steering the development work.

This is a long pending dispute between the states – Odisha & AP and is sub-judice in Supreme Court since 1968. It is not only about the ownership of 21 of the 28 villages in Kotia panchayat but about territorial rectitude and cohesion in Odisha family – the remote habitat of our tribal siblings. They have to be brought into our fold because there is enough evidence that Kotia Panchayat is in Odisha.

The CC road from Naradavalasa to Kotia, a stretch of 8 kms has been build by AP and another road in Talaganjeipadar is now complete. In the teeth of such aggressive plans to seize the territory, Odisha needs to do the following immediately:

These could be the baby steps in confidence building measures.

AP is driving it’s development agenda strongly and quite competitively – when Odisha provides Rs 500 towards pension, they offer four times (about Rs 2000)  the amount as pension. They look committed and tenacious in their efforts in owning up the land. Odisha needs to generate and sustain the confidence of the people of the Panchayat in it and it’s activities, which have to be needs based. Otherwise we would miss the bus and the inclusion, when it happens, would not be organic. And that in turn would ferment different social and security issues which could disrupt the entire development process of the state. The panchayat is precariously located at the border and amidst rebel lands.

We need to learn from our past blunders in the inclusion of Sareikala and Kharsuan in Odisha and the ensuing fiasco. We have suffered, inexcusably, by losing the territories which were rightfully ours but which we acceded due to arrogance of a few of our leaders and unabashed self interest and lowly intrigues to promote individual political careers. This could be a case study of how leaders fail a nation, even if it happened about seven decades ago.

It is our responsibility to ensure a solid, unfractured civil society for our families living at the border areas and who feel alienated.

What do we celebrate on 1st April, if we don’t have our entire family with us?

Is it not inconceivable to realise that we still have to bank on a British map of 1945 to validate our claim over 21 disputed Kotia villages? Why not a google map, for instance? We use this antique map because no survey of the area has been done and till date the local habitants do not possess any patta for their landholdings. 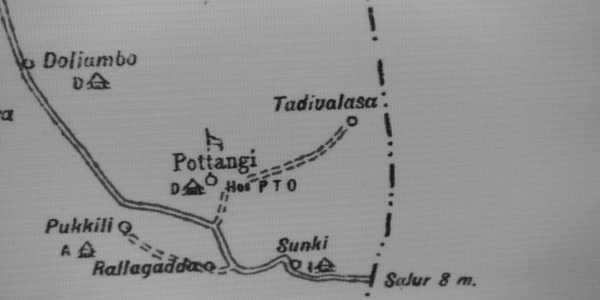 Kotia & all border districts, panchayats, villages and communities beckon you.

92 Madhya Pradesh Congress MLAs back in Bhopal from Jaipur