Khardungla: 13 members of Bhubaneswar Cycling and Adventure Club have successfully completed their cycling trip on one of the highest motorable roads of the world. This was Annual Flagship Adventure of BCAC on the route of Manali-Leh-KhardungLa (MLK) over an altitude of 17900ft MSL (Mean Sea Level). This adventure started on 2nd of August from Manali and concluded at KhardungLa top on 11th of August 2018. BCAC bravehearts rode on their bicycles under scorching heat, shivering cold, sandstorm and spine-chilling hailstorm, gravel and almost non-existent roads, glaciers to complete these 550KMs of route in 10 days. 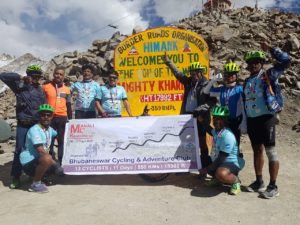 “Manali-Leh-KhardungLa route is considered as one of the toughest routes of the world and rated as an extreme route by Nat-Geo Adventure. It has many extreme challenges and adventures of high-altitude in low-oxygen levels. For any person this is a highly challenging job and for every adventure cyclist this is a lifetime adventure”- says Sanjeeb Panda, IPS and President of BCAC-cum-Team Leader of this expedition.

For the first time one lady cyclist, Ms. Sipra Hota from BCAC, has successfully completed this gruesome adventure.