Patnaik said, “I am deeply shocked to learn about the death of a person in the unfortunate incident. I deeply condole the bereaved family. I have met the injured and discussed with the doctors. A high-level probe has been ordered and two engineers have been suspended. Exemplary action will be taken against the guilty,” said Patnaik. 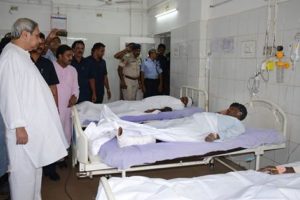 Chief Minister Shri Naveen Patnaik announced ex-gratia of ₹5 lakh from CMRF for the deceased . The treatment cost of the injured will be borne entirely by the Govt. Chief Minister also asked the authorities to clear the debris on a war footing. A high level inquiry has been ordered by Chief Engineer, Designs and Chief Engineer, Roads. Exemplary action will be taken against those found guilty. Deputy Executive Engineer Bansidhar Praharaj and AE Kishore Rout have been placed under suspension.

Police Commissioner YB Khurania, who was at the spot, said a case will be initiated against the contractor and the Government officials responsible for the mishap.

Union Minister Dharmendra Pradhan in a tweet blamed the flyover collapse on poor quality work. He offered his condolences to the bereaved family and said exemplary punishment should be awarded to the guilty. It is sad that a life was lost due to the negligence of the State Government and its appointed private agency.

Odisha Govt revenue generation registered overall growth of over 9%, spending up 36 per cent