Odisha CM Naveen Patnaik to announce package for flood-hit districts after a review meeting in Bhubaneswar this evening; the CM had earlier conducted an aerial survey of cyclone and flood-hit areas today. ‘Have heard of a landslide and we are waiting for the detailed report; my deepest condolences to the families of those who perished in the tragic incident’, says Odisha CM Naveen Patnaik. 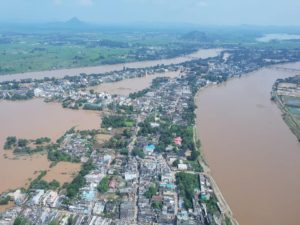 Odisha govt has failed to tackle situation post Cyclone Titli; relief materials have not even reached CM’s constituency; had the govt been prepared, helicopter and NDRF teams would have been kept ready for relief and rescue operations in advance says BJP spokesperson Golak Mohapatra.

12 feared killed, 3 missing due to a landslide in Gajapati district of Odisha