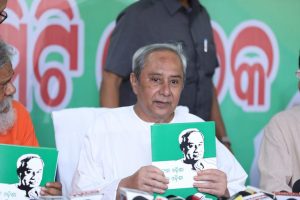 The KALIA scheme would continue for all farmers and landless agricultural labourers. Besides, the BJD Government would set up a KALIA Commission to monitor the programme in every three years, assured the manifesto with a theme of ‘Naveen Odisha, Sashakata Odisha’. The BJD said it would pursue the enhancement of paddy MSP to Rs 2,930.

BJD Manifesto says, “This time no national party will get majority on its own. BJD will support a Govt that supports the legitimate rights of #Odisha. This will be our only agenda with the Central Govt”.

BJD manifesto also commits one-time start-up allowance of ₹10 lakh to 10,000 youths and creation of six lakh employment opportunities in six focus sectors through Make In Odisha and education loan at 0%. With firm commitment to serve the people of #Odisha,  BJD announced its manifesto based on people’s suggestions, inspired by 2014 manifesto for continuity in development process. BJDmanifesto reflects the hopes & aspirations of people for Odisha.

As investment on youth is an investment in future, BJD manifesto reflects the hopes and aspirations of youths with commitment to reserve 75% jobs in all upcoming industries for qualified local youths, skill 15 lakh youths in 5 years through Skilled In Odisha.

For women, the party promised to provide Rs 5,000 crore Government work to the women SHGs per annum with a profit of about Rs 50 crores. Besides, interest free loan up to Rs 5 lakh would be given to the SHGs.

The BJD Government would provide marriage assistance of Rs 25,000 for daughters of poor families. Girl child education would be free from KG to PG level, the manifesto stated.

The Biju Expressway would connect north to south and east to western Odisha. Cuttack would be connected to Smart City Bhubaneswar by Metro Railway, it added.