2. Health Minister Shri Pratap Jena assured the completion of the work of and the starting of admission to the Kalahandi Medical College in two years.

7. Heroes of Kalahandi felicitated for their inspiring work and contribution to the undivided Kalahandi.

Bhawanipatna: The three day Kalahandi Dialogue, a global conclave on development has been launched here by Chief Minister Shri Naveen Patnaik. Using the platform the Chief Minister launched several projects for the district of Kalahandi. The District Magistrate Dr Parag Harshad Gavali introduced the proposed projects and thanked the CM for taking proactive action to expedite the development of Kalahandi.

Shri Sujeet Kumar, the Chairperson of Kalahandi Dialogue delivered the welcome address. He explained the reason behind creating this collaborative platform to engage the youth in development dialogue and action. Highlighting the need of such a forum, Shri Kumar stressed on the need of interrogating development from the grassroots and see this from people’s perspective instead of imposing the ideas of development from the above. He thanked Chief Minister Shri Naveen Patnaik for being the chief architect behind this transformation of Kalahandi from an example of poverty and hunger to the agri-producer in surplus.

Shri Subroto Bagchi, the Chairman, Odisha Skill Development Council, shared several examples of entrepreneurs from Kalahandi to highlight to the contribution they are making to the socio-economic transformation of the district. He identified three broad aspects to any development process. For him, the first aspect is to have a strong desire to create a self-identity, which is backed by the second aspect of individual development and finally achieved by the third aspect of organizational development. He shared three success stories to drive home the discussion. First was the example of Shri Dipak Sahoo, a confectioner/sweet maker from Junagadh who has become an inspiration for many by using innovative methods in business and using his business as a vehicle for social development. The second example is that of couple Sadananda Satpathy and his wife Ambika Satpathy who have started a business called Zoo Fresh, a meat and poultry supply initiative. Within only two years they have employed more than 100 people directly and becoming one of the top 20 agri-startups in the country.

He then shared the example of ITI of Kalahandi which is now 58 years old. During these years the institute has trained more than 15000 students who gainfully employed or have created employment in and around Kalahandi thereby contributing to Make in India and Make in Odisha. 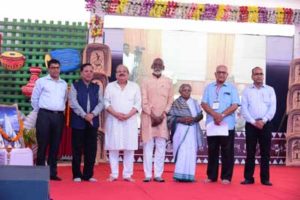 After launching a slew of development projects, Chief Minister Naveen Patnaik thanked the people of Kalahandi for the incredible spirit and indomitable energy. He congratulated the people of Kalahandi for making the district the green basket of Odisha. He wished best wishes to Kalahandi Dialogue and congratulated the organisers for this brilliant initiative. Shri Sushant Padhi offered a formal vote of thanks to close the inaugural session.

The first plenary had brilliant minds sharing their personal experiences and setting expectations for the three-day dialogue. Prof Surendranath Pashupalak, the VC OUAT shared the glorious history of Kalahandi where the region was known for rice cultivation and thanked the collaborative efforts of government and farmers in turning around the Kalahandi story of scarcity to the story of surplus. He wanted to draw everyone’s attention to the important role being played by OUAT and assured that his institution is going to play a key role in the future development of Kalahandi.

The Rwandan High Commission to India, His Excellency Mr. Ernest Rwamucyo argued that development is an ongoing and multi-stakeholder process. He shared his experience of work in Africa and Asia. He compared Kalahandi of the past and Kalahandi of the present and congratulated Kalahandi Dialogue for celebrating this positive change and being able to create a development model.

Shri Pratap Jena, the Hon’ble Minister of Health, Law, I&PR of Government of Odisha, congratulated Kalahandi Dialogue for the unique initiative and he strongly believed that Kalahandi is slated to be going to capture the global imagination of development and policy experts through Kalahandi Dialogue. Taking about local development, he assured that Government of Odisha has decided to make the Kalahandi Medical College and Hospital ready in two years.

Shri Ramesh Majhi, the Hon’ble Minister of SC & ST, Minorities & Backward Classes Development, Government of Odisha highlighted the beauty and uniqueness of Kalahandi. He mentioned the coexistence of wisdom from the modern development of Kalahandi and the ancient knowledge from the primitive tribals like Dongria Kondh in Kalahandi. He also shared how Kalahandi is no more a punishment post in government or private jobs. People who are coming to Kalahandi don’t want to leave the place, he asserted.

Shri Vaibhav Kant Upadhyay, the Chairman of India Center Foundation, first paid his respect to the Shri Rendo Majhi, the legendary freedom fighter of Kalahandi. Shri Upadhyay was impressed with Kalahandi’s infrastructure. He thanked the Odisha Government and the local leadership for the incredible turnaround of Kalahandi. He stressed that Kalahandi’s collaborative development model is an example for others in the country.

Shri Satyanarayan Sahu, former Press Secretary to President KR Narayanan, spoke highly of the term Dialogue and mentioned its significance in governance. He shared several examples of how global media houses have shared Kalahandi’s success and how Kalahandi increasingly is capturing global thinking space in development studies. He argued that it will be easy to fight environmental challenges like global warming and climate change by respecting the indigenous traditions. He also thanked the Honourable Chief Minister and lauded his effort for suggesting Ahimsa (Non-Violence) be included in the preamble of the Indian constitution.

Shri Bijay Sahoo, the Group President of Reliance Industries congratulated the Kalahandi Dialogue and found its themes extremely appealing and useful. He advocated a formula of micro-level skills development and development of the individual level willpower to determine the future of Kalahandi.

The Hon’ble Minister Shri Jena announced the approval of five new PG courses at OUAT and announced three centres of excellence. The Heroes of Kalahandi were awarded for the inspiring work. Four people namely Folk Singer Shri Sarbeswar Bhoi, Mountaineer Shri Jogabyasa Bhoi, Poet Shri Jaidrath Jena and Chess player Saundarya Pradhan were chosen for the awards. Awardees spoke about their journey and shared how they converted their difficulty into opportunities.