Odisha: Booking of Flights to Jharsuguda commenced, Bhubaneswar to be connected to Varanasi, Rourkela, Kalaikunda, Jagdalpur under UDAN

Bhubaneswar: Odisha capital city Bhubaneswar to be connected to Varanasi, Rourkela, Kalaikunda, Jagdalpur under UDAN3. This was informed by the Union Minister Dharmendra Pradhan.

Union Minister Dharmendra Pradhan attended the event for the commencement of booking of Flights to Jharsuguda by Spicejet under #UDAN3 along with Shri Jayant Sinha. Western Odisha’s 1st airport in Jharsuguda dedicated to Veer Surendra Sai will now be connected to Delhi, Kolkata,Bhubaneswar,Mumbai & Raipur. 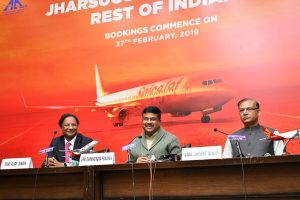 “Availability of Flights connecting Jharsuguda to the Rest of India is a red letter day in the civil aviation history of Odisha. Improved air connectivity will not only benefit people in Western Odisha, it will also be a harbinger of development for the State,” said Union Minister Dharmendra Pradhan.

A new airport at Rourkela will be connected to Raipur & Bhubaneswar. Rs 160Cr has been sanctioned for development of airports at Jharsuguda, Jeypore, Utkela & Rourkela, taking the cumulative spending to over Rs.1200Cr for developing air connectivity in Odisha since 2014.

“Under the leadership of Hon. PM Narendra Modi providing impetus to enhancing regional connectivity and making flying affordable for all has been a focus area. Under #UDAN3 Bhubaneswar will be connected to Varanasi, Rourkela, Kalaikunda and Jagdalpur,” said Union Minister Dharmendra Pradhan.

“Jharsuguda with it’s proximity to Jharkhand & Chhattisgarh which are rich in forest resources can be a great breeding ground to develop biofuels to power aeroplanes. Urged Spicejet to take this mission forward and invest in this green initiative. Investing in developing alternate fuels to power our aeroplanes at Jharsuguda will pave the way for a new paradigm in the economic development of Odisha. It will also benefit adivasis, tribals & forest dwellers residing in the neighbouring states of Chhattisgarh & Jharkhand,” said Union Minister Dharmendra Pradhan.