Bhubaneswar : Bhubaneswar Cycling & Adventure Club (BCAC) the only registered club promoting cycling and adventure activities in Bhubaneswar has recently completed yet another adventure – a signature ride – Cycling all the way to a new international destination – Kathmandu in Nepal. With a theme of “Friendship and Peace”, BCAC successfully completed its annual flagship ride from Cuttack to Kathmandu from 28th September to 10th October 2017. 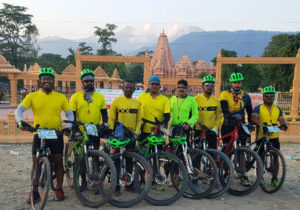 Eight (8) bravehearts of BCAC took a difficult terrain of riding on their saddles through the dense green forests, unrecognizable roads and steepest terrains to reach Kathmandu in Nepal. They covered 1502Kms within mere 12 days while climbing almost 1500+ meters through the ride. This year’s ride was coined as “Kataka to Kathmandu – K2K” for many reasons. The first being Cuttack a city of more than a thousand years has a special significance in the history of Odisha. The second, being the part of Twin-City, Cuttack has to be marked specifically by BCAC on its Annual Calendar and this ride was to sensitize the people of Cuttack to adopt cycling as a healthier, economical and eco-friendly mode of commuting. Apart from this there are a few more reasons why at BCAC, we choose to coin this ride as K2K.

This annual extravaganza of BCAC started officially from Kalinga Stadium in Bhubaneswar on 28th September morning with more than 100 riders joining the flag-off ceremony. Renowned philanthropist, visionary and founder of KIIT & KISS Dr. Achyuta Samanta flagged off this event at 7:30AM from the stadium. The peloton moved towards Barabati Fort in Cuttack, where there was a grand welcome waiting from the Barabati Cyclists and Rotary Club along with others at Cuttack. The K2K riders started their onward journey after a grand reception and worship of Maa Cuttack Chandi. 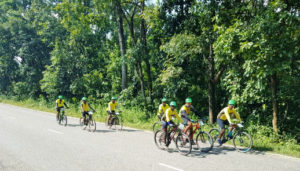 The team rode through the industrial city Angul, the land of handlooms Sambalpur, dense forest of Tapkera (inside Chhattisgarh), green vegetation and hills of Ambikapur (CG), hills and industrial rich Renukoot (inside UP), the city of faith Varanasi, Azamgarh, Gorakhpur (Sonouli), Belahiya (Indo-Nepal Border), green-rich Bharatpur, river-view Gajuri to the toughest climb on the way to Kathmandu. Meticulous planning and support from various organizations helped BCAC bravehearts to reach their destination on scheduled time without any major issues.

On the way the team received grand welcome from different social organizations, schools, Armed Police Battalions, Seema Suraksha Bal (SSB) and Nepal Police. The 2nd Bn OSAP at Jharsuguda offered BCAC riders a prodigious welcome to their establishment coined as mini-Nepal. We visited the Vaishno Mata temple, built as a replica of Pashupatinath temple in Nepal inside the 2nd Bn OSAP. At Varanasi, the peloton was greeted with august fervor by Silver Groove School with its students and directors. We also received magnificent welcome by SSB in Gorakhopur and Nautanwa. The warmth of the reception at 1st BN SSB at Nautanwa will remain alive in the minds of the riders for a long time for sure. Inside the territory of Nepal, BCAC riders received a great length of support from border police and local police, as well.

BCAC promises to bring out the best while propagating the message of “Friendship and Peace” through its rides. We also commit to keep cycling to promote cycling as a healthier and eco-friendly mode of transport for our future generations.

BCAC has successfully completed cycling expedition from Manali to Leh (2014), Bhubaneswar to Bhutan (2015) and Vietnam to Cambodia (2016) prior to riding Cuttack to Kathmandu in 2017. BCAC also have participated in well-known running events in India such as Standard Chartered Mumbai Marathon, Airtel Delhi Half-Marathon, Airtel Hyderabad Marathon, Tata Bhubaneswar Half-Marathon and such others. Every year as a flagship program, BCAC conducts coastal treks from Puri to Chilika sea-mouth along with deep-sea swimming adventures. BCAC also takes part in hiking expeditions as well as many other adventure activities in Bhubaneswar and beyond. BCAC is also planning for a 100% unsupported cycling expedition in one of the toughest terrains of India in the upcoming years.