Bhubaneswar : Two Freedom Fighters, Sri Dadhichi Sahoo and Sri Shashidhar Mishra have been felicitated in the State Archives during a colourful function organised on the eve of 76th ‘August Kranti Divas’ (August Revolution Memorial) who recounted their painstaking experiences while participating freedom struggle.

The programme, organised by Department of Odia Language, Literature & Culture was inaugurated by Ex-Rajyasabha Member and Freedom Fighter Padmashree Bhawani Charan Pattnaik who spoke that young generation has to learn from the past deeds and should actively cooperated in the process of achieving accomplished independence in
every respect. India’s Freedom Struggle has been inspirational to many Asian and African Countries in continuance in their freedom movement as well. Non-violence and Gandhian ideology have been relevant in contemporary scenario, the speakers said. 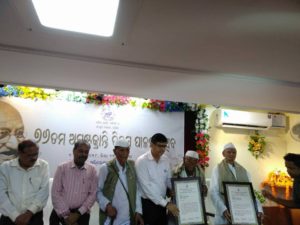 Earlier an exhibition pertaining the newspaper clippings and reports of Colonial Rulers during August Revolution was also inaugurated by the guests. Besides the presentation of a key note address on “Odisha and August Kranti” by Dr P.K. Jena, Manoranjan Panigrahy, Principal Secretary of the Department, B.K. Nayak, Director, Dr.
Kamal Kant Mishra, Vice-chancellor, Utkal University of Culture, Suchismita Mantri, Superintendent of State Archives also spoke in the programme.