Nineteen Years Journey of Naveen Patnaik is not Myth rather Transformation

By Piyush Ranjan Rout
If a Govt. is performing and evolving itself with change in its functions then why should one dump a Govt. with a proven devil first.

Then second regarding nineteen years in Govt. remember no one given him power just as it is rather every five year his Govt. fought topest election and came up successfully.

Third Naveen Patnaik unlike others never came into power asking give us a chance like others do rather always in election with his work and development agenda.

Fourth if we look at in details this Govt. with it’s determination had deliver many thing that one would expect in a welfare state, even better than what union Govt. could not delivered.

Fifth, Odisha is better known to the world now by United Nations, World Bank, even Govt. of India, Sports Federations, we have more functional medical colleges now to produce odia doctors, we have improved a lot in reducing poverty, we have improved in maternal mortality rate as well as infant mortality rate, we have hosted major sporting events that includes Hockey World Cup-Champions Trophy-World Hockey League-Asian Athletic Championship-Hero Supper Cup-in coming June we will host Tokyo 2020 Mens Hockey Olympic Qualifier, Odisha now have high performance sports training centres, now the people say state highways are better than national highways, we have better equipped hospitals, Odisha now have model schools, the state capital is now connected with districts in Air Conditioner Buses and on top Odisha a role model now in Disaster Management, a state that use to depend on others during disaster now reaches before disaster strikes.

Yes I never came across a single person till date have genuinely had any reason to throw him out but have issues like revenge, opportunistic, selfish syndrome attitude trying hard to throw him out by hook or crock and even expecting his death to achieve mission. 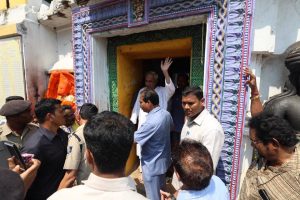 Even a friend land in Bhubaneswar from USA for holiday in home, still enjoys Indian Citizenship despite have the opportunity to change citizenship. His son had some health problem relating to ENT in dead hour of night. So he took his kid to one of the finest hospital in Bhubaneswar as good as American hospital in terms of ambiance and looks. But as soon as he reached hospital, he was advised to do this test and do that, just to test his pannic or in other words suck his credit card. But instead of panic he asked who is the doctor? No sir once you register and pay we will call the Doctor. He was shocked and asked those staffs then who all are you? how dare you to ask this or that?

Before any damage happen one of the Nurse silently told my friend, Sir if you don’t mind at this hour you won’t get any service from any Pvt. Medical in Bhubaneswar but don’t tell anyone that I advised you. Better go to Capital Hospital and you will resolve your son health issues. He was surprised as the hospital was in walking distance of his residence.

He called me at those hour just to reconfirm was it ok to Govt. Hospital or wait for Pvt. Hospital functional. I told him go to Capital Hospital, there at least you will meet to a Doctor. Then in the morning he called me to tell me, he was surprised last night what happen.is beyond his imagination.

As soon as he reached hospital a Doctor treated his son and told nothing to worry it’s probably due to weather conditions his ears irritating. Just go to the medicine counter show this prescription and get the liquid drop. Just drop few in ears, he won’t cry and will feel better. He went to medicine shop got the liquid to his surprise was free. He was surprised neither Hospital, nor Doctor nor Shop no one took money rather it was all free.

He was crazy, How that be possible in Odisha? I told him what you reads in Social Media and what is happening in Odisha will surprise you. Remember some broker busy minting cash from political patties, just to create a bad image of Naveen Patnaik’s nineteen year Govt. but yes its there way of survival.

Well my friend returned back to states, he enjoyed holiday in Odisha, he voted in election and we promised to meet again soon somewhere in USA or in other part of the world.

Despite whatever one may see I believe based on my exposure to Odisha, India and World Naveen Patnaik has single handedly delivered various leadership products that keeps me proud of being in this part of the Globe. Remember our vegetables and fish market no more depends on our neighbouring states.

I wish with blessings of People and God & Goddess Naveen will form the Govt. post 2019 election, thanks to his pro poor welfare governance benefiting poor and rich. His Govt. came to power with disastrous financial condition but now the state do have some surplus revenue to have state run programmes better better or prior to National Govt.

Eden: Where Dreams turn into Reality for Senior Citizens!

Temperature above 40 degC in 11 cities of Odisha