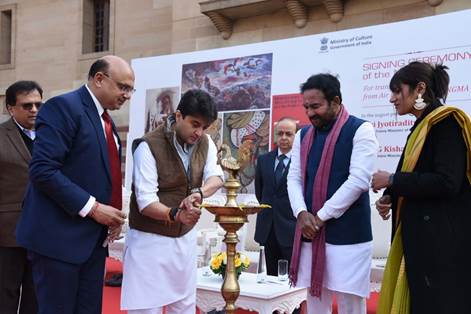 Speaking on the occasion, Union Minister of Civil Aviation and Steel Shri Jyotiraditya Scindia said that India has a five thousand old history that has been powered by spiritual forces and moral values. He said that Prime Minister has been stressing not only on India becoming an economic power but also having cultural resurgence on the global stage.

He expressed the confidence that the Artists and art collections belonging to Air India will spread awareness about Indian culture worldwide. The art collection includes paintings by eminent artists, like Jatin Das, Anjali Ela Menon, MF Hussain and Radhaji. Sh. Scindia suggested that the exhibition of the art pieces should not be confined to Delhi only but should be taken worldwide as well as in various parts of the country, showcasing Indian rich cultural heritage and soft power.

The Minister said that Air India has been a pioneer of its own kind. They could not only fly Indian flag high in the sky showcasing India’s capabilities but also acted as an ambassador of Indian heritage and culture. He applauded JRD Tata for his forward thinking and being a pioneer. He said that the showpieces being handed over NGMA not only contain modern art masterpieces but also have a wide range of exquisite handloom, sculptures and other art pieces.

Addressing on the occasion, Union Minister Shri G. Kishan Reddy said that through the historic MoU, the priceless artefacts collection of Air India since 1953, is being transferred to NGMA of Ministry of Culture. The paintings, artworks will now find their rightful place  i.e National Gallery of Modern Arts, the Minister added. Shri Kishan Reddy explained that under the vision of PM Shri Narendra Modi, the Culture Ministry is making all efforts to preserve its Culture and bring it before the people and establish its connect with the youth. The Culture Ministry is working incessantly according to the Vision of Prime Minister ‘Vikaas Bhi Viraasat Bhi”, he added.  Air India and Ministry of Civil Aviation have worked hard to preserve and protect these valuable artworks, so I promise that we will preserve these artworks for the coming generations, the Minister reiterated. He also disclosed that the collection will be displayed before art-lovers in a soon to be brought out schedule. It will  also be opened to audiences abroad through innovative digital interfaces , he said. He thanked M/o Civil Aviation and Air India for their valuable contribution to the art treasure of NGMA. 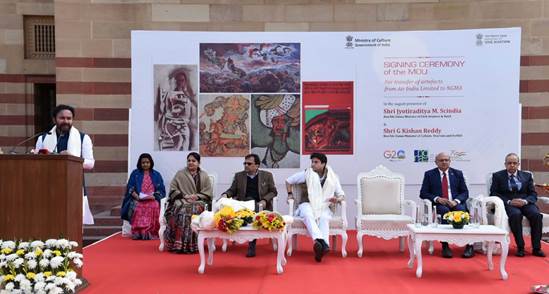 During Air India’s extensive journey over eighty years of operating as a commercial airline, Air India had acquired and collected a massive number of valuable artworks from around the world consisting of paintings, sculptures, wooden carvings, glass paintings, decorative items, textile art, photographs and other objects. These art objects will be a part of the collection at NGMA.

The decision for acquisition of the priceless collection by the Ministry of Culture and the decision to transfer the collection from the Air India Building at Nariman Point in Mumbai to the National Gallery of Modern Art is of historic importance. 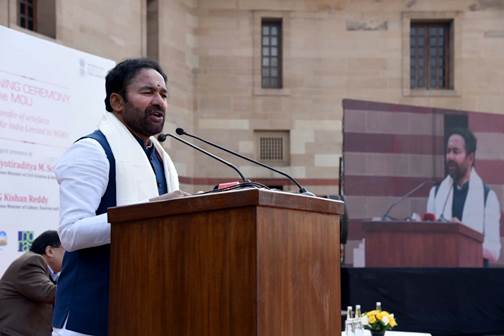 The modern and contemporary artwork from the Air India Collection  includes acquired and commissioned work from artists of the stature of B Prabha, Shankar Palsikar, Lakshman Pai, Vasudev Gaitonde, M F Husain, S H Raza, K H Ara and other founders of the Progressive Art Movement like the pioneering artist Hari Ambadas Gade. It also includes works of art of living legends like Anjolie Ela Menon and Jatin Das that will enhance the NGMA collection further.