“The attitude of Naveen Patnaik, during the cyclone “Foni’ regarding cooperating with the Union Government, was highly appreciated by both Modi and Amit Shah. His respect for the cooperative federalism touched both the leaders,” said Anirban Ganguly, who also heads Shyama Prasad Mukherjee Research Centre at New Delhi and is a policy adviser to BJP.

Both Biju Janata Dal and BJP have gone quiet after fighting a bitter battle in the recent elections and enjoy a cordial relationship with each other, said the author during a session at Kalinga Literary Festival, the prestigious literary event in India.

Lack of Good Odia Cinema is due to lack of Confidence : Sidhant Mohapatra

During a session on “Odia Films : Then and Now” , Ollywood actor-turned-politician Sidhant Mohapatra said the reason of drop in quality of Odia Cinema compared with past movies is because there is lack of confidence among movie makers.

“One of the reasons why good Odia movies are not produced is not because there is lack of content, but lack of confidence among movie producers. They believe content-oriented movies might not fetch good return and hence have found a safe haven in photocopying other language movies that have done good business,” he said. 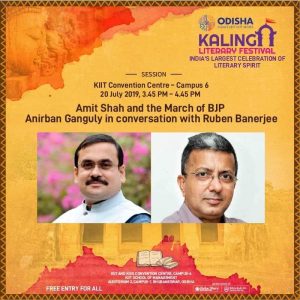 There were discussions on state of Odia paint artists, about speaking truth to the power, the need for being liberal, progressive women of contemporary times. There were discussions on relationship of religion with trade, the art of being a successful book publisher and a session on new age Hindi literature that ran simultaneously at multiple venues during the second of the KLF.

The 6th Odisha Tourism Kalinga 1Literary Festival, the largest summer festival of India, will continue till 21 July 2019 . For the first time Odisha Tourism has tied up with the event to promote tourism in the state. This is first such engagement of Odisha Tourism in any literary festival.

KLF Founder and Director Mr. Rashmi Ranjan Parida believes that KLF 2019 is unique in many ways as it bridges the gap between the local, national and global literary dialogues.

The art festival, which runs simultaneously with the main KLF event, has attracted more than 60 artists from many states of India this time. There are dedicated sessions on understanding and appreciating art. The artists and expert art critics discussed important concerns in their profession, the connection between art and literature in a session dedicated to Challenges Ahead for Arts and Paintings on the second day of the literary event.