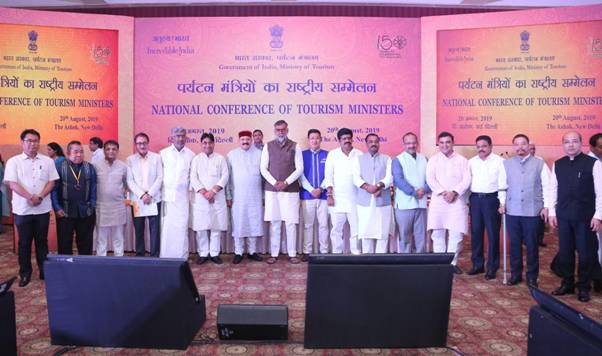 New Delhi: The one-day National Conference of Tourism Ministers concluded successfully in New Delhi today. Organized by the Union Ministry of Tourism, it was inaugurated by Union Minister of State for Tourism & Culture (Independent Charge),Shri PrahladSingh Patel. The conference was attended byState Tourism Ministers of 19 States, Secretaries of Tourism and senior officials from the States and Union Territories (UTs) who deliberated on various issues related to the development and promotion of Tourism.

Speaking on the occasion, the Tourism Minister urged for better coordination between Centre and States to increase number of tourists in India. Highlighting the importance of perception, Shri PrahladSingh Patel said that we need to change the perception of India in the mind of foreign tourists which will yield us good results for promotion of tourism. He asked the States to organize surveys in their respective States to understand how the foreign tourists perceive India and should work towards removing negative impressions, if any. The Minister stated that all of us together have to make concerted efforts to realise the Prime Minister’s dream of doubling the tourists, both foreign and domestic over the next five years.

Addressing the participants, Shri Patel also urged all the Sates and UTs to follow the norms of UNESCO while making proposals for Heritage site of their sites with the help of ASI.The Minister said that we have great potential in our natural sites and we should focus on adventure tourism to attract more tourists in this sector. He also said that recently, in order to promote night tourism, the Culture Ministry has decided to open 10 historical monuments till 9 PM for common visitors across the country. He also urged all the States and UTs to open their important monuments till late night for visitors.

The Tourism Minister also handed over three new Memorandum of Understandings (MoUs) and five new Letters of Intent (LoIs) to the prospective Monument Mitras at the conference today.

Discussions were held with the States / UTs to get their inputs and feedback on the following subjects:-

Developing an all-encompassing One Stop Solution including information on tourism related services through a web based application and a Grievance Redressal Mechanism through Twitter and Tourist-Helpline
Adoption of Adventure Tourism and Bed & Breakfast / Homestay Scheme Guidelines by States/UTs
Status of projects sanctioned under the Swadesh Darshan & PRASHAD Schemes and implementation of Public Financial Management System (PFMS).

Discussions werefollowed by Presentations which were made by the State Governments of Kerala and Sikkim showcasing their best practices in the tourism sector.