In her address, Hon’ble President Shrimati Droupadi Murmu said that the members of the Constituent Assembly expressed immense faith in the wisdom of citizens and made the provision of election on the basis of adult franchise. The people of India have made their belief true. India’s democracy is respected as the world’s largest, vibrant and stable democracy.

Addressing the gathering, the President said that social revolution has been possible in our country during the past seven decades through the election process. It is a great success of our democracy that the common voter living in remote areas feels that he/she has a major role in deciding who would and how they would govern the country or state. She expressed confidence that with the combined efforts of the Election Commission and all other participants, our democracy would become stronger.

The President further said that the motto of the Election Commission ‘no voter to be left behind’ to motivate the voters, is commendable. The collective contribution of the Election Commission and the voters strengthens the electoral process of our country. She urged all citizens to consider voting as their contribution to nation-building and must vote with the spirit of ‘nation paramount’. She added that it is a great achievement of our election process and our democracy that the active participation of women in the democratic process is continuously increasing.

Guest of Honour, Shri Kiren Rijiju said that the Ministry of Law & Justice, has been supporting Election Commission of India in bringing forth the electoral reforms like the recent amendment to the Act facilitating voter registration throughout the year. He added that all the decisions are being taken after due consultation with support of all political parties.

CEC Shri Rajiv Kumar in his address acknowledged that the biggest asset of the Election Commission of India is the trust gained due to its professional conduct of elections over the years. He elaborated that while electors in India have increased from about 17 crores in 1951 to over 94 crores now and the voter turn out was the highest ever at 67.4% in 2019 GE, the ECI is committed to motivate the remaining non-voters to come out to the polling station for an inclusive & participative elections. He further added ECI is keen that the Assured Minimum Facilities developed in the schools are of permanent nature and become a gift of the election process to the students in these schools.

During his address, CEC Shri Kumar thanked the voters of the country for participating enthusiastically in the elections and appreciated political parties for their cooperation and support in strengthening the electoral process and democracy at large. He also thanked the election machinery of India, which has conducted every election with total precision and perfection.

EC Shri Anup Chandra Pandey in his address said that ECI focus is to reach out to every voter including persons with disabilities, senior citizens, women, transgender, PVTG and all sections of society. “We have provided four qualifying dates every year for electoral enrolment to increase the number of youth voters. Special women specific initiatives have been launched to reduce the gender gap. Postal Ballot facility has been introduced for 80+ senior citizens and PwDs. Special Accessibility measures on polling booths are undertaken to facilitate PwD voters” he added.

In his welcome address, EC Shri Arun Goel said that the  Hon’ble President’s presence, on this occasion, is a source of  inspiration for  continued fulfillment of ECI’s constitutional mandate for free, fair, inclusive, accessible, ethical and transparent elections. He said that the Commission has strived to facilitate and to enhance the voter experience by carefully devising strategies of voter registration, design of the polling station, voter education and voter outreach. Declaring National Voters’ Day Celebration is a continuation of these efforts.

On the occasion, the Hon’ble President presented the National Awards for the Best Electoral Practices for the year 2022. A total of 13 awardees were felicitated for outstanding performance in the conduct of elections during 2022 in different spheres such as IT initiatives, Security Management, Election Management, Accessible Election, Electoral Roll and contribution in the field of voter awareness and outreach. The best State award was given to CEO Himachal Pradesh for the conduct of Assembly Elections in 2022 and National Media Award to News Services Division, All India Radio for their outreach and awareness program.

An ECI song- “Main Bharat Hoon- Hum Bharat Ke Matdata Hain ” produced by ECI in association with Subhash Ghai Foundation, was screened on the occasion. The song brings forth the power of vote and celebrates the spirit of inclusive, accessible, ethical, participative and festive elections in the largest and most vibrant democracy of the world. 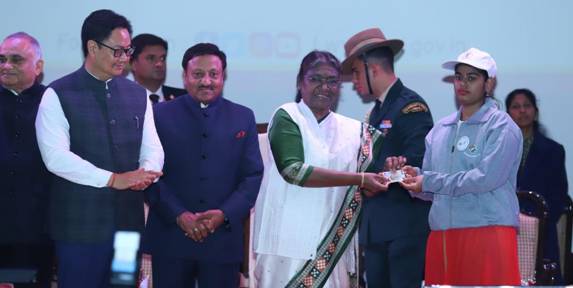 During the function, five newly enrolled voters from Delhi were also felicitated and handed over their Elector Photo Identity Card (EPIC) by the Hon’ble President.

A multimedia exhibition showcasing the grandeur of Indian elections and various initiatives by the Commission was also displayed during the function. The exhibition showcased a bird’s eye view of the pride of Indian Democracy, i.e, Electronic Voting Machine related facts, recent initiatives and innovations of the Commission, inclusive & accessible elections. The exhibition apprises the viewer about the snippets from recent elections, the efforts of the Commission to set up polling stations in remote and inaccessible terrains with the motto of No Voter to Be Left Behind.

A Model Polling Booth was set up supported by virtual reality to show all the activities with voiceovers explaining the election process at each booth thoroughly. An interactive wall showcasing all facilitation at the polling station and women’s polling station was also displayed.

The theme for this year’s NVD, ‘Nothing Like Voting, I Vote for Sure’ is dedicated to voters which conveys individual’s feeling and aspiration towards participation in the electoral process through power of their vote.

National Voters’ Day iscelebrated on January 25 every year, all across the country to mark the foundation day of the Election Commission of India, i.e. 25th January 1950. The main purpose of the NVD celebration is to create electoral awareness amongst citizens and encourage them to participate in the electoral process.