Music Composer/Singer Amartya Bobo Rahut says, “The Covid Pandemic and subsequent Lockdown gave me time to work on my own music.
I made two songs during the lockdown, set up my channel. The period has boosted me as an artist.”

Amartya has experimented with his singing skills as well. He says, “I am thankful that people have welcomed my voice in the 3 independent songs that I released.
“Shaam Simti”, “Chup Chup” and “Mere Aulia”.

He adds, “Digital platforms are a great source for independent artistes to showcase their craft. An artist should support another artist. Artistes like Arijit Singh and Amit Trivedi have immensely supported and shared my work on their respective platforms.”

Amartya started off as a guitarist for popular Bengali bands- Shiva, The Fifth Dimension, Cactus, Paras Pathor (founding member), Prakriti, Asteroids etc. He was one of the founding members of band ‘Paras Pathor’. But he geared up for the bigger game in Mumbai when realised that music is limited in Bengal industry.
Sharing the experience of his album ‘OM’, he says, “In Bombay, I, Amit Trivedi, and Sriram Iyer decided to make an album ‘OM’. I composed, Sriram sang, and Amit produced. It was very different from the albums I had done in Kolkata.” 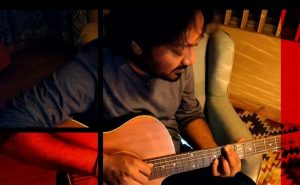 He mentions that the advertising industry has shaped his body of work a lot. He has composed over 2000 Tv Commercials.
“Composing Music for TV adverts is one of the most challenging things in the business, considering one has to deliver under very short timelines while maintaining high standards. It seems easy but it’s very tough to crack the code of those 15-30 secs,” said Amartya.

Sharing his memory with late actor Sushant Singh Rajput, Amartya says, ” ‘Drive’ was technically the last release of Sushant Singh Rajput. I met him a couple of times while making the songs of the film. He was a super talented guy. May his Soul Rest In Peace”.

His latest independent release ‘Mere Aulia’ talks about the journey of self discovery and inner calling. Composed by Amartya, it has been sung by Brijesh Shandilya, Shibani Kashyap, Dev Arijit and Amartya himself.

Diplomats’ Day organised by TRIFED and Ministry of External Affairs at the Tribes India Aadi Mahotsav at Dilli Haat!