Mukteswar Dance Festival to start from January 14 to 16

Bhubaneswar:The State Government is gearing up for another three-day exclusive Odishi dance festival on the sprawling lawns of Mukteswar temple here from January 14 to 16.
While the IODF was hosted by the Department of Culture, the Mukteswar Odishi Dance Festival is being mounted by the Department of Tourism. The festival features one solo performance followed by a duet and ends with a group presentation during every evening. 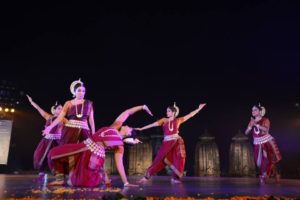 Young choreographer Rosalin Mohapatra’s Devadasi Odishi Ensemble from Bhubaneswar will be the final performer of the first evening.

The second evening will commence with a solo concert by Salini Pattnaik from USA followed by a duet by Sipra Swain and Aishwariya Singhdev from city-based Srjan Odishi Nrityabasa of Guru Ratikant Mohapatra.

Kolkata-based Debamitra Sengupta along with her troupe will have the final group presentation of the evening.

The third and final evening of the event will have solo dancer Gayatri Chand from Bhubaneswar, followed by a duet by Bengaluru-based Sarita Mishra and Manisha Manaswaini from city-based Debadasi Odishi Institute and group presentation by Guru Bichitrananda Swain’s Rudrakshya Odishi Foundation from Bhubaneswar.

The festival will be telecast live on DD-Bharati, besides live streaming on www. Webcast.gov.in, the hosts informed. Entry to the festival venue is free for all, they explained.