The primary function of the Department of Legal Affairs is to tender advice in the capacity of a legal adviser to the referring Ministry/Department of the Government of India. This year the Department received 5417 references from various Ministries/ Departments for legal advice. The types of references for legal advice include opinion for filing of SLP/review/ appeals before the Hon’ble Supreme Court, High Courts and other judicial/quasi-judicial forums, vetting of counter affidavits, conveyancing matters, competency for enacting state bills and private member bills, cabinet notes containing legislative and non-legislative proposals and opinion on other miscellaneous references involving legal complexities.

India has signed Bilateral Investment Treaties (BITs) or Bilateral Investment Promotion and Protection Agreements (BIPAs) with several countries. These agreements provide a Investor State Dispute Settlement (ISDS) mechanism for settling disputes between investors and the country of investment. In 2015, with the approval of the Cabinet, a decision was taken to terminate the BIPAs/BITs. However, by virtue of the sun set clause the investors can raise disputes for another period of 10 years under ISDS mechanism. As on date there are 9 (nine) arbitration cases being handled by the Department of Legal Affairs involving various investors namely Antrix-Devas, Antrix-Devas Commercial / BIT arbitration, Khaitan-Loop Telecom KOWEPO, GPIX, Essar, (Aircell) Maxis Communication Berhad (MAD), Jaldhi Overseas.

With the objective of promoting, encouraging and facilitating mediation, especially institutional mediation for resolution of civil and commercial disputes, enforcing mediation settlement agreements, providing for a body for registration of mediators, encouraging community mediation and making online mediation as an acceptable and cost effective process and for matters connected therewith or incidental thereto, a comprehensive standalone law on Mediation has been introduced during the winter session of the Parliament on 20.12.2021.

The Bill was referred for examination and report, to the Department related Parliamentary Standing Committee on 20.12.2021. The Committee has submitted its report on 13.07.2022 and pursuant to the examination of the Report, further steps are being taken to introduce official  amendments and enable the passing of the Mediation Bill, 2021

With a view to expedite the establishment of the Council, the following rules have been notified:-

Presently, other works for the establishment of Arbitration Council of India are underway.

The New Delhi International Arbitration Centre Act, 2019, provides for the establishment of an institution of national importance, namely the New Delhi International Arbitration Centre for creating an independent and autonomous body for facilitating institutional arbitration. The NDIAC shall, inter alia, provide facilities and administrative assistance for conciliation, mediation and arbitral proceedings, maintain panel of arbitrators, both at national and International level; promote research and study, provide teaching and training and organize conferences and seminars in arbitration, conciliation, mediation and other alternative dispute resolution matters. The Centre has been established vide notification dated 13th June, 2022.  The Chairperson and the Members of the Centre have been appointed and are likely to assume charge soon.

The following Rules as required under the New Delhi International Arbitration Centre Act, 2019 have also been notified by the Central Government :-

The Chamber of Arbitration under the Centre, to empanel experienced arbitrators of repute, at the national and international level, is being established. The Centre shall be a game-changer in investor’s perception of doing business in India, by establishing itself as a professionally managed arbitration center.

VII.       Legal Education
A Joint Conference of Chief Minister and Chief Justices of High Court was held on 30.04.2022 on legal education.  In this conference, the Hon’ble PM mainly gave emphasis on followings: Vide GSR No 438(E) dated 9th June, 2022 vacancies for central public notaries for various States/Union Territories have been enhanced. Vide GSR No. 597(E) dated 22nd July, 2022, Rule 8B of the Notaries Rules, 1956 have been further amended empowering the Central Government to renew the certificate of practices which are received within one year after expiry of validity period.

During the year 2022, the Tribunal disposed off a total of 36368 appeals and 39107 are pending for adjudication. The website of ITAT has been updated and made fully functional. JudiSIS App, ITAT e-Filing Portal, e-Library Portal have been launched. The concept of paperless courts has been introduced with the online publication of daily orders and online communication of hearing notices. The ITAT API has also been linked with the LIMBS portal. Digital Display Boards have been installed in the tribunal premises akin to the High Courts.  Exercise, to fill up the vacancies of President, Vice-President and Members (Accountant/Judicial) are underway. 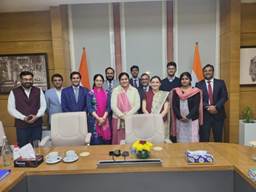 Realizing the need to develop a robust and citizen-friendly justice delivery system and imagining India’s vision for the year 2047 as part of ‘Azadi ka Amrit Mahotsav’, the All India Conference of Law Ministers and Law Secretaries was held on the 15th and 16th of October, 2022 at Tent City, Ekta Nagar, Gujarat. The two day Conference was hosted by the Ministry of Law & Justice with the objective of providing a common forum for the policy makers of the nation to discuss the plethora of issues that concerns the Indian Legal System. It was envisioned on the lines of Hon’ble Prime Minister Shri Narendra Modi’s vision of ‘Sabka Prayas’ (everyone’s efforts) to build a new India & to inculcate a sense of coordination and cooperation in every organ of our democracy.

The Centre, the States and the Union Territories discussed and deliberated on making our legal system more accessible, affordable and citizen friendly. A variety of topics relating to the Indian legal system were also discussed, and it gave an opportunity for the States and Union Territories to exchange their best practices that can serve to upgrade the overall legal system of the country in the interests of its citizens, particularly the weaker sections of the society, thereby empowering them to create an inclusive and vibrant new India.

With a view to accelerate the use of Official Language and to increase the awareness among the employees as regards to the official language policy and the various incentive schemes for using Hindi in official work a Hindi Pakhwada was organized in the Department from 14.09.2022 to 29.09.2022 and the Hindi Diwas was celebrated in the Department on 14.09.2022. This was done with the objective of giving wider publicity to the various schemes and generating maximum output in terms of work done in Hindi.

This year, during the Hindi Pakhwada, 5 competitions namely, Hindi Essay Writing, Hindi Typing, Translation, Hindi Noting and Drafting and Hindi Dictation were organized for officials of the Department. The successful participants were awarded certificates of merit along with cash prizes. ‘Hindi Diwas’ was also celebrated in the Branch secretariats of the Department at Bengaluru, Chennai, Kolkata and Mumbai and the offices of the Income Tax Appellate Tribunal. LIMBS Ver.2 is an upgraded version of LIMBS and was launched in the year 2020 in collaboration with NIC. It is a dashboard based system for the user Ministries/Departments on which they can see their cases at a glance. With the concerted efforts of Ministries/Departments, the application has captured 9.24 lakh court cases (including Disposed of cases) through 14345 registered users, thereby creating a single-unified database of litigations pertaining to Union of India. The application has captured details of 3281 courts and 22930 advocates.

Recently, EAC-PM (Economic Advisory Council to be Prime Minister) has also given access to LIMBS Portal for facilitating in preparation of white paper on UOI litigation. In compliance of the directions / advisory issued by Ministry of Health & Family Welfare, a Vaccination Camp had been conducted in Department of Legal Affairs on 5th Aug. 2022 and 224 officials got vaccinated with first dose / second dose / precautionary dose.

Department of Legal Affairs, Ministry of Law & Justice, Government of India, in its extended efforts to celebrate “Azadi Ka Amrit Mahotsav” also initiated “Har Ghar Tiranga” Campaign with an aim to invoke the feeling of patriotism in the hearts of the citizen and promote awareness about our national flag conducted competitions in three categories viz. Essay, Debate and Post on Social Media in which law students studying in Law Colleges / Institutes across the India participated.  Winners In all the three competitions were awarded with Trophies, Cash Prizes and Certificates. 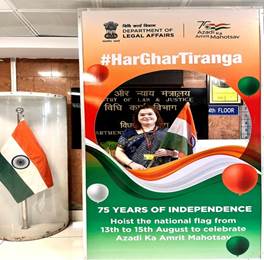 A two day Badminton Tournament  on 17th and 18th September 2022 was conducted at Thyag Raj Stadium, New Delhi in association with Bar Council of India.

Department of Legal Affairs conducted Hindi Pakhwada Celeberations on 29th Dec. 2022 at Dr. Ambedkar International Centre, New Delhi.  Various competitions in different categories were conducted by the Official Wing of the Department from 1st Sept. 2022 to 15th Sept. 2022 and the winners were awared Cash prizes and certificates during the programme. Ayurveda Day was conducted during 10th to 17th Nov. 2022 as per the directions of Ministry of Ayush.  Department of Legal Affairs assigned the theme “Sharing of Experiences” under Ayurveda @ 2047 Programme.  Various officers of Department of Legal Affairs came forward with their experiences on AYURVEDA and their videos were shared on the official social handles of the department.

The Department of Legal Affairs observed “Vigilance Awareness Week” of 2022 from 31st October to 6th November pursuant to the direction of Central Vigilance Commission. In its observance, Essay competition in Hindi and a Poster Making competition were conducted for the officials of the department and cash prices & certificates were awarded to the winners.

Department of Legal Affairs organised the following activities to commemorate the Constitution Day this year on 26th November 2022 : Under the guidance of Hon’ble Prime Minister Shri Narendra Modi, in order to empower the women of country for making India a vibrant nation where gender based discrimination would have no place, the Department of Legal Affairs, Ministry of Law & Justice under the aegis of the Hon’ble Union Minister of Law & Justice Shri. Kiren Rijiju and Hon’ble Minister of State Prof. S.P. Singh Baghel envisaged hosting a Sensitization & Awareness Workshop and Nukkad Natak to sensitize the officers and staff at Shastri Bhawan.  An awareness and sensitisation workshop on Sexual Harassment of Women at Workplace (Prevention, Prohibition & Redressal) Act, 2013 was conducted on 6th December 2022 at Shastri Bhawan, New Delhi.  Dr. Anju Rathi Rana, Additional Secretary convened the workshop by giving a welcome address before the attendees. Law Secretary Dr. Niten Chandra while presiding the event also welcomed the resource person Advocate (Supreme Court) Shri Shashank Shekhar in his address and kick started the interactive workshop. In addition to this, a Nukkad Natak on Sexual Harassment of Women at Workplace (Prevention, Prohibition & Redressal) Act, 2013 was performed by the students of Culture Society, Campus Law Centre, Delhi University on 7 December, 2022 at Shastri Bhawan for raising awareness and to inculcate the spirit of respect and honour equally towards the women in society.

Ministry of Social Justice & Empowerment in convergence with Department of Border Management, MHA will launch ‘Nasha Mukth Bharat Abhiyaan’ in the 17000 Border Villages in 18 States/UTs during May 2023