For singer Rakshita Suresh, the ‘Yaane Yaane’ (‘Mimi’) song holds a remarkable place in her musical career. Having debuted with the composition of legendary music composer A.R Rahman, Rakshita says, “2020 has been a year of blessing for me as I started working with A.R Rahman sir. He is someone I have worshipped and dreamt of working with.”

However, the process technically started in 2019, when Rakshita was called by A.R Rahman’s team for a devotional album. But Rakshita takes us back to her days in the ‘Super Singer 6’ when she says, “I had participated in a Tamil reality show called ‘Super Singer 6’ 3 years ago. A.R Rahman sir was the face of that season which means the winner of the show will get a chance to sing for him. Though I became the runners-up, I kept on singing and performing in live shows. However, I didn’t get much of the recording. I had sung a few tracks as a playback singer, but those can’t be called my ‘breaks’ considerably. But in 2019 December, for a devotional album I got my first project with A.R Rahman sir.
In 2020, I sang a track for some other song. Then he called me for the second time as there had some changes to be done with the lyrics and that’s how I started recording for him.”

A blend of Indo-Arabic tunes, ‘Yaane Yaane’ proves to be great for ears. “‘Yaane Yaane’ has a lot of Middle Eastern, Palestinian elements in it infused with Indianness.

The song happened with so much ease. I just went with the flow when I got the song at the studio. A.R Rahman sir knows how to bring the best out of an artist. I become my best version when I am in his studio,” shares Rakshita. 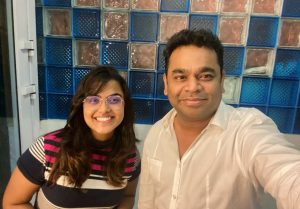 She goes on narrating, “I am connected with A.R Rahman sir’s music since long ago. ‘Yaane Yaane’ made me re-live the entire process until now. My mother says that during my toddler days I used to listen to ‘Chhaiya Chhaiya’ and only eat my food if that’s being played. There is another interesting thing as well. My mother had watched ‘Jeans’ (Tamil movie) at the theatre in which Rahman sir had given music. That time she was expecting me. During song sequences in the movie, my mother says that I used to react in her womb. I got a chance to perform two lead songs (in Telugu and Tamil) in the digital concert of ’99 Songs’ in April, 2021. Infact, I sang backing vocals in his live concert in 2019 and was a part of the audience of his live concert in 2018. So this whole process makes me realize how blessed I am. The effort, the wishes, the opportunities are all worth it.”

‘Yaane Yaane’ is a celebration of welcoming the newborn into the family. However, the movie conveys a strong message about surrogacy and ignorance related to it in India. Rakshita opines, “Surrogacy as a topic or as a medical procedure is not much touched in Indian society yet. And also, very few movies have been made about it. It is a serious thing that should be highlighted. I am glad that ‘Mimi’ is strongly delivering that message. The movie made it extremely easier for the audience to understand what surrogacy is. With a complete package of comedy, seriousness, emotions, and practicality, ‘Mimi’ has correctly delivered the facts about surrogacy as well as the idea of motherhood beyond blood relation. I watched it with my family and they all loved it. I am just so honored to be a part of it.” 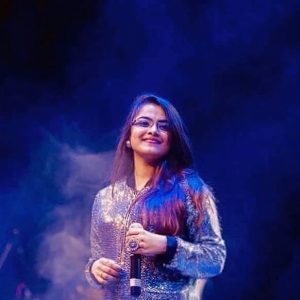 Rakshita started her professional career in music after getting featured in multiple reality shows. She says that reality shows have given her clarity about pursuing music as a career. “I started participating in reality shows when I was in 2nd or 3rd standard. My first experience was with a Kannada reality show. It was a few years ago when I realized that music is what I want to pursue in life. I have tried out two Hindi reality shows as well. But it didn’t work out. But after 2018, ‘Super Singer 6’ opened a new gate for me.

Reality shows have played an important role in my life. I entered into the shows with a dream and they have come true, maybe not immediately but eventually. Because the right talent requires a correct opportunity too. People see beyond every factor. The reality shows have made it clearer for me as an artist and taking the very first step into the industry.”

Talking about her plans in Bollywood and working on an independent music scenario, Rakshita says, “I have composed a few tunes that are right in the process to be developed. I guess soon I will be stepping into independent music. You know, in independent music you don’t need any other factor or story to narrate yourself. I am so glad that finally, India is getting into that zone again. I am also looking forward to working more in Bollywood.”