Mumbai : The two day long mega event of cultural excellence ’Ama Utkarsha Odisha’ featuring the art, culture, culinary delights, artistic fabrics and textiles of Odisha concluded on Sunday. In this grand celebration organised by non-resident Odias staying at Mumbai there was phenomenal display of unique and rarest Odia art and culture.
Inaugurating the programme the Governor of Jharkhand Droupadi Murmu said, “Odias are quite unique in their language, culture, attires, attributes and food delicacies. So it’s a matter of pride that the Odias residing in Mumbai have congregated to explore that unique cultural identity through this mahakumbh.”
At the outset of the inaugural ceremony, the President of Maharashtra Odia Welfare Association and lead organiser of ‘Ama Utkarsha Odisha’ Bhagaban Panda in his welcome address congratulated all Odia associations and community members to join for such a grand conclave of ideas and inspirations.
To mark the occasion, four stalwarts were honoured with ‘Great Sons of the Soil’ Award. They are Rangabati exponent Padmashri Jitendra Haripal, noted film personality Padma Shri Sisir Mishra, NALCO CMD Dr Tapan Kumar Chand and industrialist Sanjay Das.
In memory of the martyrs of Pulwama attack silence was observed as a mark of prayer for the departed souls. Befitting tribute was also paid to the Martyrs through spectacular sand art.
The Principal CGM of RBI Dr Rabi Mishra lauded the enthusiasm of Odias in gathering for such a momentous occasion in Mumbai and making it a phenomenal success. On the second day of this grand ceremony, the Deputy Governor of RBI, Bibhu Prasad Kanungo in his speech presented a vivid picture of Odia cultural diversity. 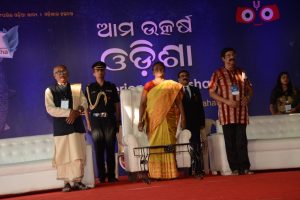 To mark the occasion awards winning movies namely Sisir Mishra’s ‘Surya Mandir’ on Black Pagoda Konark, Sibu Prusty’s ‘Lord of the Universe’; ‘Kotpad Weaving’ by Biswanath Rath; ‘Seba Bou’ by Subhash Sahoo and ‘Krantidhara’ by Himanshu Khatua were screened and highly applauded by the audience.
In the cultural segment great performing folk art and folk music of Odisha consisting of Nama Sankirtan, Ghumura of Kalahandi, Paired Conch or ‘Jodi Shankha’ of Ganjam, classical Odissi dances, Ranapa dance, ’Thia Puchi Naranga’, tribal dance forms and Sambalpuri folk dance were the leading attractions in this spectacular event. Around 150 cultural talents from Odisha had joined the celebration. A ballet on ‘The Great Paika Rebellion’ was staged on the inaugural day. 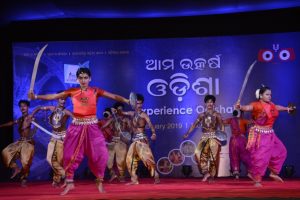 The coffee table book published recently by OdishaLIVE on Bargarh Dhanu Yatra was dedicated on the stage of this mega event. The Founder of OdishaLIVE and Editor of the publication Nilambar Rath was also felicitated on the occasion.
Such a mega celebration like ‘Ama Utkarsha Odisha’ intended to commemorate the Odia fraternity in Mumbai and to propagate the Odia tradition of excellence to the people outside of Odisha is going to take the shape of a grand annual event with an aim of rejoicing the Odia exuberance and cultural harmony.

The first Annual Sports Meet of the Central University of Orissa