Rajgangpur: Martyred CRPF jawan Pradeep Kumar Panda was given guard of honour at Rajgangpur and later his final rites were conducted at his native place on Wednesday afternoon.

The CRPF DIG, Collector Vineet Bhardwaj and SP Pinak Mishra also paid their homage to the martyr. Hundreds of people had gathered at the stadium with the surrounding getting reverberated with slogans of ‘Saheed Pradeep Panda Amar Rahe’.

The body was brought to Biju Patnaik International Airport (BPIA) in Bhubaneswar from New Delhi on Tuesday night.

The martyr was also given a guard of honour by the CRPF personnel at the airport. The body was brought from Bhubaneswar to Rajgangpur by road which reached on Wednesday morning. 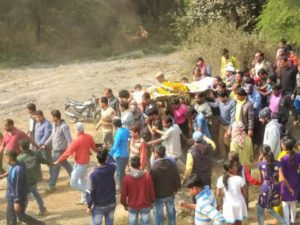 Later, the body was taken to Liploi, the native place of Panda. Before the final rites, gun salute was given. DIG(Western Range), Rourkela Kabita Jalan paid homage to martyr at Liploi. Former Union Minister and Rourkela MLA Dilip Ray also paid visit to the house of deceased and offered floral tribute to the martyr. As a mark of respect to slain Jawan, all the Government, private offices and courts were closed. After a procession across the city, the body was cremated at Rajgangpur cremation ground. Panda’s sister’s son performed last rites and put fire on the body.

Mukteswar Dance Festival to start from January 14 to 16

Puri, the land of Jagannath