LOVE STORY OF BIJU PATNAIK; SON OF ODISHA AND SON-IN-LAW OF PUNJAB

Biju Patnaik, the maker of modern Odisha is well known as a free and frank person who never tried to hide anything. He claimed that his life is like an open book He was very friendly with the media persons irrespective of age.

Once he invited Mr Sunit Ghosh , Bureau Chief of Ananda Bazar Patrika , Mr Bankim Chandra Das , Special Correspondent of Hindusthan Times, Mr Swarup Jena of Hindustah Times and me for breakfast with him at his official residence. We were very happy to join him.

Bijubabu  laughed loudly and said, you all know that I was a member of Delhi Flying Club and Gyan was also a member of the same club. We both were fond of playing tennis and were loved each other deeply.

Once Gyan proposed me to go on a drive to Agra on a full moon night and to enjoy the beauties of Tajmahal . Instantly I agreed at this proposal. 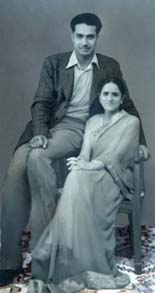 We made the preparations to drive to Agra after all the family members would go to sleep so that we can give a big surprise to all..

I reached Gyan;s house in the evening and met her after the family members went to bed. Both of us were very much excited about this secret trip. It was decided that Gyan will sit on the driving seat and hold the steering wheel, I will push the car from behind and the car will silently be out from the garage. Then we will start the car and drive for Taj Mahal to spend an exciting memorable night under the cool full moon. 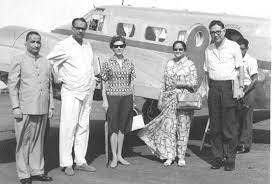 Gyan got ready after everybody went to bed soon after dinner; Gyan sat in the driving seat and put the car in neutral gear. I started pushing it from behind. The car started moving forward silently and while half of it was out of the garage, all of a sudden I felt s strong paw on my shoulder, I was shocked and found that it was none other than Gyan’s father.

He caught hold of me and Said, hallo young man I never expected such a cowardly act from a brave person like you. Both Gyan and I begged apology and revealed our plan. He smiled and advised us to drive safely and come back to join breakfast with all in the family..

“This was a rare experience in my love life,” Biju said and smiled.