Shri Lalchand Kataria, Minister of Agriculture and Animal Husbandry, Government of Rajasthan and Shri Udayalal Anjana, Minister of State, Cooperation Department, Government of Rajasthan were also present at the inauguration ceremony. Apart from them senior officials from Central Government, State Government and Indian Council of Agricultural Research and around 15,000 farmers, agri startups, corporates bankers, extension workers and employees of private agricultural institutions participated in the first day of the event. Lok Sabha Speaker Shri Om Birla said that India is an agricultural country. Our country is at the forefront in food production. In the changing agricultural landscape, we should resolve to use contemporary practices, and using innovation, we should aim to become a frontline country in the world. He said that AatmaNirbhar Bharat (self-reliant India) will be realized when our farmers use new agricultural practices, innovation, value addition, more crop per drop etc. Shri Om Birla stressed on the use of horticulture, startups and drones. He said that through Startups, we have worked to bring down production cost in some instances, and in other cases we have increased production, at some places we have set up food processing units and at other places we have achieved value addition.

Shri Lalchand Kataria, Agriculture and Animal Husbandry Minister, Government of Rajasthan said that to improve the financial condition of the farmer, there is a need for new technology, innovation, animal husbandry, traditional farming, all of which has been displayed here. Through the startups, farmers will get information about how to store, how to do farming with less water, how to plough the field with less cost.

Shri Udayalal Anjana, Minister of State, Cooperative Department, Government of Rajasthan said that both Agriculture Department and Cooperative Department are complementary to each other. Farmers should be educated by organizing such fairs, which will strengthen their economic condition. Lok Sabha Speaker Shri Om Birla and Minister of State for Agriculture and Farmers Welfare, Government of India, Shri Kailash Choudhary also inaugurated the drone demonstration by flying the drone themselves.

In this exhibition, 150 stalls have been set up to provide farmers with updated information related to agriculture. Keeping in view the important role of startups in the field of agriculture, 75 stalls of Startups have been set up in this exhibition, which is one of the main features of the exhibition. Information about the schemes being run by the Central and State Governments for the farmers is being provided through the various stalls set up in the exhibition. Along with this, private sector companies / organizations related to the supply of various inputs for agriculture have also displayed their products.

After the formal inauguration of the two-day agriculture festival, exhibition and training programme, parallel farmer training sessions were organized in three training rooms on modern and scientific agricultural techniques on the subjects of agriculture, horticulture, animal husbandry and dairying. Two training programmes each were organized in all the three auditoriums this afternoon. Farmers were taught the nuances of remunerative farming by various subject experts. Six training programmes were organized on contribution of Quality Seeds in crop production, advanced cultivation of guava and amla in Farmers Producer Organization Kisan Bazar, Kota division, Climate Smart Farming Practices, Sheep Farming for additional income and importance and use of Nano Urea in Sustainable Farming etc.

Vote of thanks was delivered by Smt. S. Rukmani, Joint Secretary (M&T), Ministry of Agriculture & Farmers, Government of India. 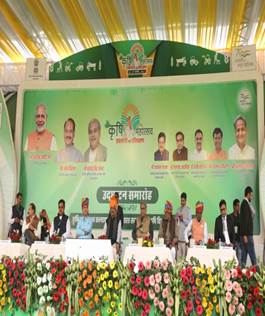 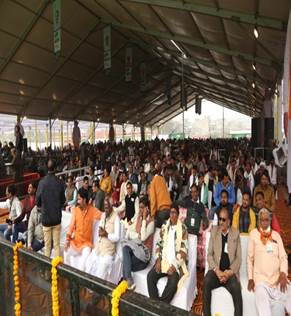