Under the Project RE-HAB, “Bee-fences” are created by setting up bee boxes in the passage ways of elephants to block their entrance to human habitats. The boxes are connected with a string so that when elephants attempt to pass through, a tug or pull causes the bees to swarm the elephant herds and dissuade them from moving further. 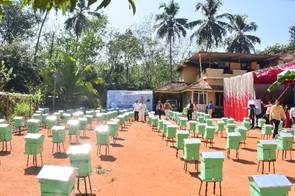 This is a cost-effective way of reducing human-wild conflicts without causing any harm to the animal. It is scientifically recorded that elephants   fear the bee swarms that can bite their sensitive inner side of the trunk and eyes. The collective buzz of the bees annoys elephants which force them to return.

Speaking on this occasion Shri Manoj Kumar said “It was seen that Bees help the farmers in arresting the encroachment of elephants in their agricultural fields and destroy them.Not only this, some precious lives are also lost in that condition. Taking an initiative, KVIC initiated a pilot project with the Technical assistance of the College of Forestry, Ponnampet, Kodagu District and the results were encouraging. Hence, 6 such projects were sanctioned in the most wanted states namely Assam, Maharastra, west Bengal, Orissa, Uttarkhand apart from Karnataka.” Under the RE-HAB farmers are trained in bee-keeping and each of them are supplied with 10 Bee boxes and installed in the elephant corridors so bee boxes and bee hives are placed in the Elephant corridor to restrict elephants from approaching the agricultural field.  This Pilot project has shown very good results in Ponnampet. This project has also helped in the increasing agricultural output due to enhanced pollination as well as Honey Extraction, he informed.

Chairman, KVIC also emphasised the farmers to take benefit of the scheme for it’s long-term advantages. Speaking on this occasion he also shared in details  about the PMEGP Scheme ok KVIC which  has enhanced Loan ceiling  from Rs 25.00 Lakhs to Rs 50.00 by the Prime Minister and encouraged the women and rural youth to take up the scheme.