Jyotiraditya M. Scindia says the government to be a constructive collaborator with all stakeholders of the aviation sector for the development of Civil Aviation in the country

New Delhi: Civil Aviation Minister Shri Jyotiraditya M. Scindia today said that the government will be a constructive collaborator with all stakeholders of the aviation sector and work with them for the development of Civil Aviation in the country. Formally inaugurating Wings India 2022 at Begumpet Airport in Hyderabad today, he said “We don’t believe in square tables, we believe in roundtables at our Ministry to ensure the success of this sector and our country at large.”

Wings India 2022, Asia’s largest event for commercial, general and business aviation, is being held with ‘[email protected]: New Horizon for Aviation Industry’, as main theme. The event which took off yesterday is being jointly organized by the Ministry of Civil Aviation and FICCI. Speaking on the occasion, Shri Scindia said that the Indian Aviation sector has passed through a lot of trials and tribulations during the pandemic period, but it is emerging stronger, fitter and ready to face challenges and tap the opportunities. The sector has shown resilience, and by next year, we will surpass the pre-covid number of domestic passengers. The international flights are going to fully resume in a couple of days, and number of international travellers from India will also jump rapidly.

Shri Scindia said that the Wings India 2022 is a watershed moment, as it is being organized in the 75th year of Indian independence- Azadi Ka Amrit Mahotsav. He said that the agenda of Gati Shakti given by Hon’ble Prime Minister, a twin-pronged initiative and synergy of giving speed and the power, will drive India for years to come. He said that various departments of the Government of India across the umbrella have come together to power India. And as India moves from 75 to 100 years, it will emerge as new power as paradigm has changed and there is lot of focus on infrastructure development. The building of infrastructure is not confined to the economic centres but being provided in all parts of the country for everyone, he added

Talking about the metamorphosis in the Indian Civil aviation sector in last 7 years, Shri Scindia said that India is the fastest growing civil aviation market in the world. There has been expansion across the spectrum in the sector, with the number of airports in the country going up from 74 in 2013-14 to almost 140 (including Heliports and water domes).The number is likely to go up to 220 by 2024-25. There were 400 aircrafts in the country then and the number has gone up to 710 in 7 years. It is intended that more than 100 aircrafts should join every year.  He said that regional connectivity is the focus of the government, with provision of last mile connectivity. The Minister said that UDAN is a mission to connect every single citizen, and make flights accessible to common man. “Hawaii chappal pehene wala bhi hawai jahaz main udd paye,”, he added. Underlining the Hon’ble Prime Minister’s vision for UDAN scheme, he said that  more than 409 routes have been identified under the scheme, over 1.75 lakh flights have taken place and more than 91 lakh passengers have benefitted.

The Minister said that the Civil aviation ecosystem contains other components like cargo, MROs, FTOs, Ground handlers, Drones, and requisite action is being taken for all these. New policy for MROs has been announced. More training centres are being added, so that Indian pilots get trained within the country. He also informed that 15% of the Indian pilots are women, which is the three times the global average. For the Drones, new policy has been announced and PLI scheme has been initiated, so that the Prime Minister’s vision of making India a global leader in the sector is realized. The Minister also said that new helicopter policy has also been announced.

Shri Rajiv Bansal, Secretary, Civil Aviation informed that India’s UDAN scheme is reaching out to tier 3 & 4 cities which will enable a large number of Indians taking to the air for travel. The Union Minister also Released the Knowledge Paper on the occasion.

An MoU between Hindustan Aeronautics Ltd (HAL)and Pawan Hans Limited (PHL) was signed on the occasion. 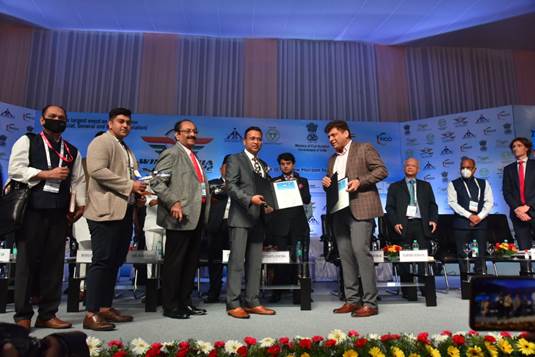 The Minister also launched Small Aircraft Sub-Scheme. Its primary objective is to facilitate and stimulate regional air connectivity by creating a growth-oriented framework with a specific focus on operations through small aircrafts (including seaplanes). The Scheme intends to facilitate creation of an ecosystem for small aircraft operations in the country by providing the framework necessary for bringing together relevant stakeholders such as States, airlines, airport operators and policy makers to collaborate towards the success of this initiative.

On this occasion, the Union minister also took part in Global CEOs Forum.