Lilabari is amongst nine FTOs to be established in five airports in India by June 2022 includes Belagavi and Kalaburagi in Karnataka, Jalgaon in Maharashtra and Khajuraho in Madhya Pradesh. M/s Redbird Aviation has won the right to establish the FTO at Lilabari. Airports Authority of India has leased land for the FTO and facilitated statutory approvals from DGCA and BCAS. With the establishment of these FTOs, India will aim to become a global hub for pilot training.

Currently, at Lilabari, Redbird Aviation has stationed 2 aircraft for flying training – Tecnam P2008JC Single Engine and Tecnam P2006T Multi-engine which would eventually be increased to 5 by year end.

In Lilabari FTO, Ground Classes (Online + Offline), Practical flying training, Drone flying training and Simulator training on Alsim Level-5 Simulator and A320 Fixed Base Simulator will take place for Single Batch of 10 students which will be increased to 20. The process for enrolment in the FTO will take place with an online entrance exam which is conducted every few months. Applicants need to be above 18 years of age and should have completed their 12th board exams with English, Physics and Maths. After completing their training, students can be employed in Airlines, Private charter services, Air ambulances, Government pilot jobs, Cargo/freighter services.

Speaking on the occasion, Shri Jyotiraditya M. Scindia said, “I consider myself blessed to be in Assam which is renowned internationally for its history and culture. Assam is becoming the growth engine of Northeast. Lilabari Airport was inaugurated by Former Prime Minister Late Shri Atal Bihari Vajpayee in the year 2003-2004, and today it is being given due importance by opening of the first FTO in Northeast. With the opening of this FTO, the youth of North East will get the opportunity to attain Vidya (Knowledge) and Gati (Speed). 40 % of our pilots get trained aboard which results in the loss of Rs 500 crore of foreign exchange. To reduce this, we have decided to open up 9 new FTO by this year and in the next stage, 15 new FTOs will be established, taking the current number of FTOs in India from 34 to 58.” 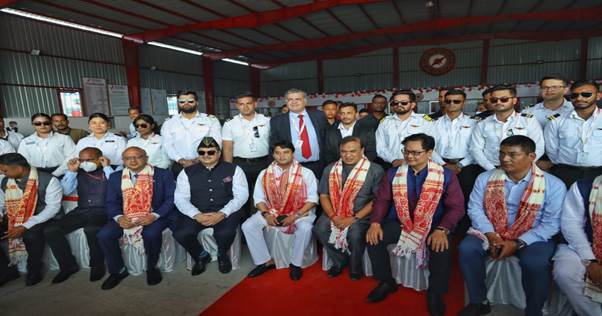 The minister further stated “We have brought a new helicopter policy which has reduced the extra cost of operation, and in Assam, we will establish two new heliports in Geleki and Nagaon in next 2 years. On Guwahati River front, we will establish Umrangso water aerodrome in the coming years. Prior to 2014, we had 74 airports in India but in 7 years, we have established 66 new airports taking the total to 140 airports in the country. In Assam, we had 4 airports in Guwahati, Dibrugarh, Jorhat and Silchar but today we have established 3 new airports in Lilabari, Tezpur and Rupsi.”

Speaking on UDAN scheme and its benefits for Assam, the minister stated, “Guwahati, the capital of Assam has been connected with Durgapur, Varanasi, Dibrugarh in this summer schedule and we will connect it with Bangkok, Dhaka, Kathmandu, Yangoon and Hanoi”

Requesting Chief Minister of Assam Dr. Himanta Biswa Sarma to reduce state VAT on ATF (Aviation Turbine Fuel), Shri Scindia said, “In the past 8 months, I have requested every state government to reduce VAT on ATF and I am delighted to tell you that 12 states have reduced VAT from 20-25% to 1-4% on my request. There are 23 states where VAT is reduced to 1 to 4% and I request Chief Minister to reduce Assam VAT rate so that we can operate more flights to and from Assam. States which reduced their VAT, have seen 15% increase in connectivity in a timespan of 2 months.”

Development of North-eastern Region (NER) is not only of strategic importance, but also is a part of India’s growth story. Connectivity in NER is very essential and in many places air transport is the lifeline for movement of people and the cargo. Under “Ude Desh Ka Aam Nagrik (UDAN)”, the Regional Connectivity Scheme (RCS), Ministry of Civil Aviation (MoCA) has identified NER as a priority area.  This has helped in enhancing inter and intra connectivity for the NER. In this regard, new airports are getting developed and old airports are getting upgraded. Considering the hilly terrain, helicopter operations under UDAN scheme have been given focus for connectivity.

Today, Northeast Region has 15 operational airports as compared to 9 before 2014. About 18 airstrips, heliports/ helipads, water aerodromes are also awarded under UDAN scheme and are being developed in NER. These massive aviation infrastructure development projects being undertaken by Ministry of Civil Aviation will boost tourism, investments and employment in NER.

Central Advisory Council constituted under the RERA meets under the chairmanship of Shri Hardeep S.Puri;