Singh informed that India has emerged as one of the world leaders in energy transition with the fastest rate of growth of renewable energy capacities in the world.  He told his German Counterpart that in India we have a transparent bidding system, an open market, an expeditious dispute resolution system, and we are globally acknowledged as one of the most attractive destinations for investment in RE.

Shri Singh emphasized that India has huge ambitions in energy transition.  It will add 500GW of non fossil fuel capacity by 2030. India is coming out with bids for green hydrogen. The Minister further stressed on the need for developing storage for balancing RE such as pumped hydro and battery storage.  It will also need large capacities of electrolysers manufacturing for Green Hydrogen for which India is already planning bids. He invited German industry to come and compete for developing this ecosystem in India. 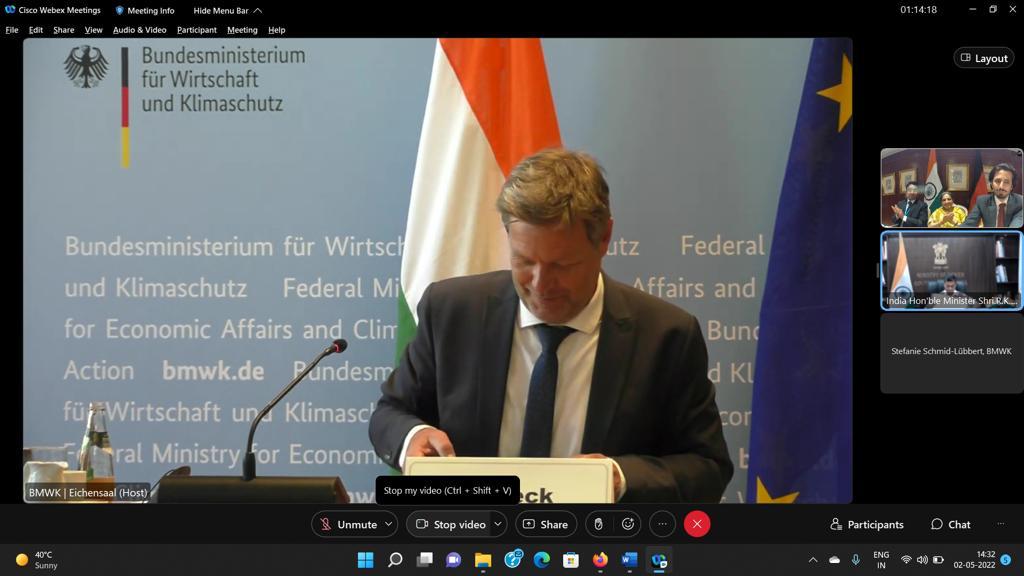 The German Minister appreciated India’s ambitious plans for RE expansion and expressed his interest in opportunities for investment in offshore wind farms in India given German expertise in the same.

Under the agreement which was signed today both countries  will establish an Indo-German Green Hydrogen Task Force to strengthen mutual cooperation in production, utilization, storage and distribution of Green Hydrogen through building enabling frameworks for projects, regulations and standards, trade and joint research and development (R&D) projects.

India has launched the National Green Hydrogen Mission with the goal to make India the global hub of Green Hydrogen production and export. Germany also has developed an ambitious National Hydrogen Strategy with the aim to assume global leadership in hydrogen technologies. Blessed with abundant renewable energy potential and experience of implementing renewable energy projects, India can produce low-cost Green Hydrogen to progressively decarbonize a range of industry sectors, and also export it to meet global demand. With strengths in innovation and manufacturing, Germany is already implementing numerous hydrogen projects.

Trade of Green Hydrogen and/or its derivatives such as Green Ammonia / Green Methanol would form the cornerstone of the collaboration. Institutional collaboration in joint research, light house projects, innovation clusters and hydrogen hubs would catalyse the synergistic efforts of the two countries. The ambitious deployment targets would also create attractive investment and business opportunities for industries from both countries.

India and Germany share the common goal to decarbonize their economies. Both nations are committed to develop a national green hydrogen economy. The common long-term goal is to reduce emissions and protect the environment. This requires a global upscale of green hydrogen production and offtake. India and Germany therefore support the establishment of a global green hydrogen economy, to facilitate the achievement of the goals under the Paris Agreement. Both sides are convinced that common goals can be achieved better in close cooperation, building on individual strengths and capacities.

​Foreign Secretary, Vinay Mohan Kwatra on an official visit to France from 05-07…