Bhubaneswar: The final day of JDCA’s 12th International Film Festival on Art & Artist was packed with exciting content: international film screenings, illustrated lectures, question and answer sessions with visiting filmmakers, and an exhibition of Odia handcrafts. The day started with the Odia film by the renowned cinematographer Raju Mishra Lakshmi Ra Abhisara (Laxmi’s visit to her loved one), based on the short story by the eminent writer Manoj Das. Both Raju Mishra and Manoj Das were in attendance and had a question and answer session with the audience after the screening. A variety of international shorts were shown throughout the morning, including a collection of French animation films as part of the ongoing celebration of French Culture in India, Bonjour India Festival: Mer des pluies and Au premier Dimanche d’Aout.

The film My Life as a Zucchini was introduced by Riccarda Chanda, Cultural Attaché from the embassy of Switzerland, who said she was excited to show Swiss filmmaker Claude Barras’ debut stop-motion animation film in “one of her favourite cities.” Children were invited to the screening of this film, which is based on the novel by Gilles Paris, Autobiographie d’une Courgette. The film was previously shown at Director’s Fortnight and won Best Adapted Screenplay and Best Animated Film in 2017 at France’s Oscar-Equivalent, the Cesar Awards.

Manisha Mohan, animator and Chief Designer at Tata Interactive, showed a short Odia animation film she had worked on as part of her talk, Animation and New Media. She spoke about the versatility of animation and its cross-disciplinary uses, explaining that “animation is not only about making cartoons, but about using creativity to solve real world problems.”

Nirmal Chander Dandriyal introduced his film, The Face Behind the Mask which informs about Chhau dance through the story Shashadhar Acharya. This was followed by the National Award-winning film, Kapila, which follows the life of Kutiyattam dancer Kapila as her entrancing movements earn her recognition. This film was made by eminent filmmaker Sanju Surendran, who answered questions from the audience after the film. Two of distinguished Odia filmmaker Nirad Mohapatra’s documentary films, Ahilya Ra Bahaghara and Pata Paintings of Orissa, were shown in the afternoon as a continuation of Saturday night’s tribute to the late artist. This was part of JDCA’s Meet the Artist series, which was followed by the screening of his award-winning feature film, Maya Miriga.

The final event of JDCA’s 12th International Film Festival on Art & Artist was an illustrated lecture by one of India’s foremost photographers, Raghu Rai. He began the talk by showing the trailer of the movie Raghu Rai: An Unframed Portrait made by his daughter, filmmaker and photographer Avani Rai, after which he reminisced on his artistic journey through a showing of his work. The festival closed with the screening of the Argentinian film, The Secret in their Eyes by Juan Jose Campanella. The film is based on the book The Question in Their Eyes (El Secruto de sus Ojos) by Eduardo Sacheri. The crime-drama won the Oscar for Best Foreign Language Film in 2009. 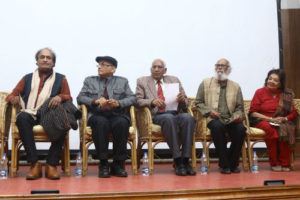 The JD Centre of Art would like to thank the filmmakers, writers, artists, and distinguished persons who attended the Film Festival. While the Film Festival was held at the IDCOL Auditorium in Bhubaneshwar, the construction of JDCA continues at the site, located opposite the historic Khandagiri Caves. There are currently over 2,000 documentaries in the Forum’s archive. Donations of films have come from: Doordarshan, Films Division, National Film Archive, Lalit Kala Academy, Indira Gandhi National Center for the Arts, Public Service Broadcasting Trust, Institut Francais, Swiss Embassy, and individual filmmakers. We are already looking forward to the JDCA’s 13th International Film Festival on Art & Artist and hope you are too! In the meantime, be sure to get involved with our other programs like Meet the Artist, which takes place every second Saturday of the month. Like JD Centre of Art on Facebook to stay up to date on JDCA news and for information about how to submit your own work for next year’s festival.
The Festival was made possible by a partnership with Department of Tourism, Govt. of Odisha and support from Odisha State Beverages Corporation. The media partners in Odisha are the dailies Orissa Post and Dharitri. The outdoor publicity partner is the well-known company, Team.

Partition of India was worse than the holocaust: Devdas Chhotray