Konark: The inaugural performances at the 32nd Konark Festival, today exhibited the best of India’s ancient cultural arts. The highly popular festival which has since its establishment earned the praise of established artistes from across India and the world, was inaugurated to emerge as India’s first cultural festival post opening up of the lockdown. This once again establishes Odisha’s pioneering efforts at emerging out of crises and celebrating its cultural richness.
Prior to the performances, the inaugural began with the traditional lamp-lighting ceremony. Hon’ble Chief Minister of Odisha, Shri. Naveen Patnaik declared the festival open through a virtual address.

“The beautiful open-air auditorium at Konark has witnessed several prolific performances with the grand Konark Sun Temple at their backdrop. This land is aptly called Utkala, given the synergy it witnesses among India’s classical dances including Odissi, Bharatanatyam, Manipuri, Kathakali, Kathak, Kuchipudi and Sattriya. This celebration has been made possible by the untiring and united efforts of Government of Odisha which has courageously tackled every challenge posed by the pandemic. It is our firm belief that the show must go on. It is this spirit that fuels our zeal for good governance and preservation of Odisha’s rich cultural treasures”, said Chief Minister Shri. Patnaik.
The opening performance was a series of Odissi dances performed by a troupe of Orissa Dance Academy under the guidance of by renowned Odissi Guru Smt. Aruna Mohanty. The Odissi performance, while generally performed by danseuses, also comprises items denoting mythological stories involving male characters, which are choreographed accordingly. 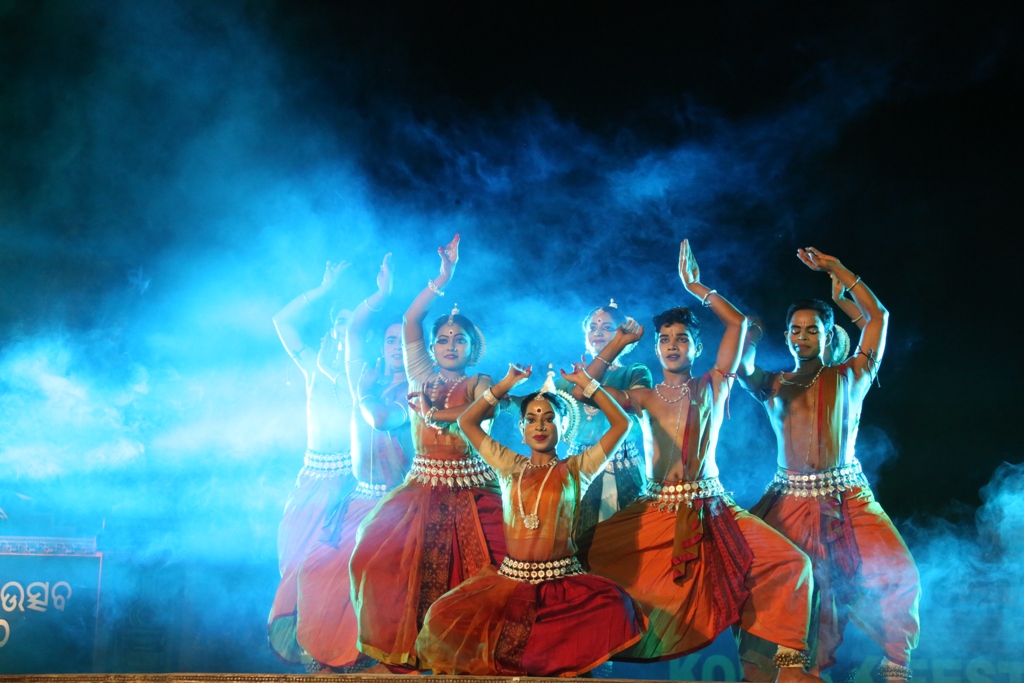 The second set of performances in Bharatanatyam, was by a troupe from Sridevi Nrithyalaya, Chennai – led by exponent Smt. Sheela Unnikrishnan. Being a predominantly solo dance, Bharatnatyam leans heavily on the abhinaya or mime aspect of dance – the nritya, where the dancer expresses the sahitya through movement and mime. Shabdam follows the jatiswaram in a Bharatnatyam dance performance. The accompanying song is generally in adoration of the Supreme Being. After the shabdam, the dancer performs the varnam. The varnam which is the most important composition of the Bharatnatyam repertoire, encompasses both nritta and nritya and epitomises the essence of this classical dance form.
The various acts constituting both dances represented mythological stories of morality, romance, and historical linkages with pilgrimage. The dancers and groups, including the vocalists and musicians, were felicitated on stage for their mesmerising performances.
The day also witnessed the inauguration of International Sand Art Festival 2020 at the iconic Chandrabhaga Beach, with 15 groups 70 sand artists from across states such as Bihar, Tamil Nadu, Rajasthan and West Bengal besides Odisha.
The second day will witness performances in Manipuri by a troupe from Manipuri Nartanalaya, Kolkata led by accomplished danseuse Smt. Bimbavati Devi and group, and of Odissi by a troupe from Sanjali Ensemble of Bengaluru led by exponent Smt. Sharmila Mukherjee.
The festival has been organised in complete adherence to COVID-19 safety protocols – from social distancing in access and seating, to comprehensive sanitisation. The performances are being telecast live on LED screens at Chandrabhaga Beach and webcast live on webcast.gov.in/konarkfest/ for those who are not able to witness the cultural extravaganza in person.