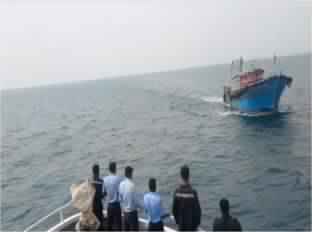 New Delhi: Indian Coast Guard (ICG) initiated series of pre-emptive measures from first sign of weather disturbance in Bay of Bengal on Apr 23, 2019 and implemented lessons learnt from Cyclone Ockhi to ensure safety of lives at sea. Extremely Severe Cyclonic Storm Fani is presently 260 nautical miles SE of Vishakhapatnam and likely to intensify further and cross Odisha coast between Gopalpur and Chandbali to the south of Puri around May 03, 2019.

Pre-Emptive Measures – One Week in Advance

Indian Coast Guard ships and aircraft were deployed along the East coast since April 24, 2019 for issuance of advisories and warnings in vernacular languages to fishermen at sea and for their safe return to ports. International Safety Net (ISN) was activated on April 24,2019 in the Bay of Bengal by Maritime Rescue Coordination Centres (Chennai/ Mumbai) requesting transiting Merchant vessels to advise and warn fishermen to return harbour/ take shelter at nearest fishing harbour and render assistance, if required and is continuing since them.

Transmission of Navigational Telex (NAVTEX) warnings commenced on April 24, 2019.Preparedness meetings were conducted by Chief Secretaries at Chennai on April 24,2019 and Kolkata on April 30, 2019. The meetings were attended by ICG representatives.

Deployment of ICG Surface and Air Assets- Tamil Nadu, Andhra Pradesh and Puducherry coast – nine ships, Odisha and West Bengal – five ships, Indian Coast Guard Ships have been kept standby for mobilization of Disaster Relief Material in coordination with State Authorities at Chennai and Vizag. Four Dornier sorties are being launched every day on an average for alerting fishing boats from Chennai, Bhubaneswar and Kolkata.

Safety of Fishing Boats- ICG coordinated with Fisheries Authorities of respective states and confirmed that no fishing boats are presently operating at sea. AdditionallyICG ships and aircraft deployed at sea are also keeping lookout for warning/shepherding of fishing boats if sighted/located at sea.

Indian Coast Guard Ships, Dornier and Helicopter are kept standby for distribution of Relief Material in coordination with State Authorities/NGOs at Chennai, Vizag and Kolkata.