New Delhi: India has registered an unprecedented record in the number of COVID-19 cumulative tests. It has crossed the landmark of 20 crore (20,06,72,589) total tests today.7,40,794 tests were conducted in the last 24 hours.

Progressive countrywide expansion in testing infrastructure has played a crucial role in the steep rise of testing numbers. With 2369 testing labs in the country including 1,214 Government laboratories and 1,155 Private laboratories, the daily testing capacity has got a substantial boost.

The cumulative positivity rate is also declining and presently pegged at 5.39%.

High level of comprehensive testing on a sustained basis has also resulted in bringing down the national positivity rate. 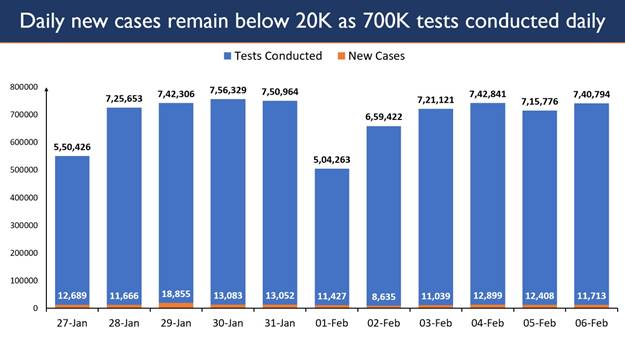 India’s total Active Caseload continues to follow a consistent downward slope. It has dropped to less than 1.5 lakh (1,48,590) today and is the lowest in 8 months. The number of beneficiaries being vaccinated every day has shown a consistent and progressive increase. 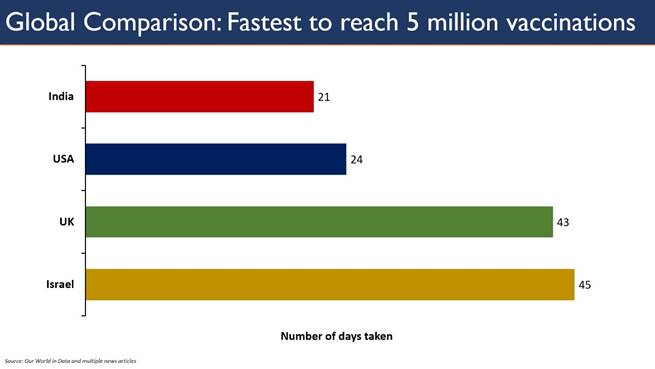 India has also recorded a downfall in the daily new cases and an increase in recovered number of people. The Recovery Rate has reached nearly 97.19%. Total 1,05,10,796 people have recovered. 14,488 patients have recovered and discharged in the last 24 hours.

82.07% of the new recovered cases are observed to be concentrated in 6 States/UTs.

Kerala has reported the maximum number of single day recoveries with 6,653 newly recovered cases. 3,573 people recovered in Maharashtra in the past 24 hours followed by 506 in Tamil Nadu. 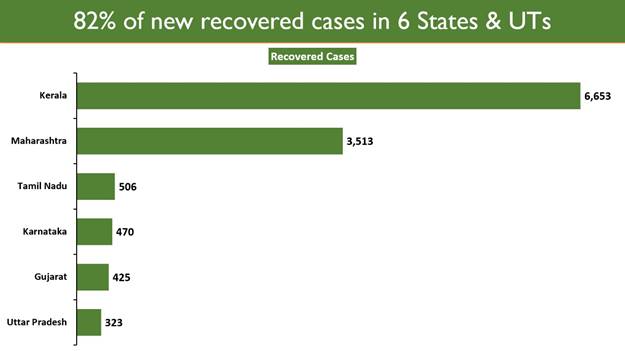 Kerala continues to report the highest daily new cases at 5,610. It is followed by Maharashtra with 2,628, while Tamil Nadu reported 489 new cases.

Six States/UTs account for 81.05% of the new deaths. Maharashtra saw the maximum casualties (40). Kerala follows with 19 daily deaths and Chhattisgarh with 8. Only two states have registered a double digit daily casualty count.