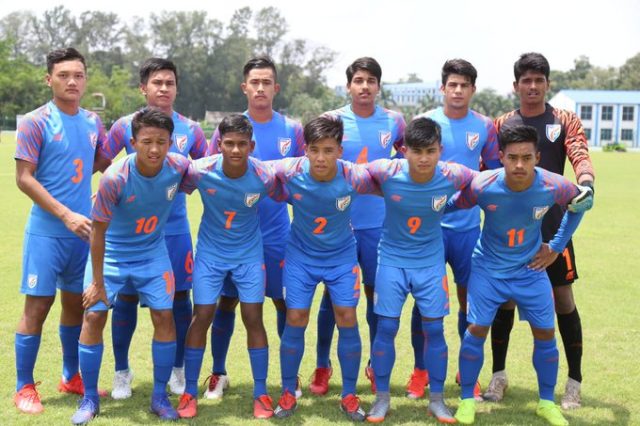 KALYANI: India completed a dominant performance against Nepal in the opening match of the 2019 SAFF U-15 Championship, at the Kalyani Stadium, on Wednesday (August 21, 2019).

It was an all-round display by the Indians as five different players scored for the Blue Colts — Maheson Singh, Shubho Paul, Anish Mazumder, Taison Singh, and Sridarth.

The home side started off swiftly, as Maheson cut in and unleashed a fierce right-footer that rocketed into the goal six minutes into the game.

After an initial spell of domination, Maheson made his way down the right flank in the 24th minute and crossed it in for Shubho Paul to tap it in from inside the 6-yard-box.

Just before the end of the first half, India struck again, this time, through captain Anish Mazumder, who leapt above the rest of the pack and nodded the ball into the net.

Taison curled in a fourth for India five minutes after the restart as the home side was awarded a free-kick outside the area. In the 56th minute, Sridarth was played into the box, as the youngster slipped the ball past the opposition keeper to make it five.

India Head Coach Bibiano Fernandes praised his team’s attacking intent in the post-match press conference. “Sridarth is the player who has been scoring goals on a regular basis, but it’s the effort of the entire team that has helped us in getting this result. I am really happy for the guys who scored the goals today,” Fernandes said after the match.

India are set to face Bhutan in their second match of the campaign at the Kalyani Stadium, on Sunday, August 25.