India is the largest ‘connected’ nation in the world today with more than 800 million broadband users: MoS Shri Rajeev Chandrasekhar

New Delhi : The Minister of State for Electronics & Information Technology and Skill Development & Entrepreneurship, Shri Rajeev Chandrasekhar has said that India is the largest ‘connected’ nation in the world today with more than 800 million broadband users. He was addressing the concluding ceremony of the India Internet Governance Forum 2022, here yesterday, with the theme ‘Leveraging Techade for Empowering Bharat’. The Secretary, MeitY, Shri Alkesh Kumar Sharma and other dignitaries were present on the occasion.

Speaking on the occasion Shri Rajeev Chandrasekhar said that we are the largest ‘connected’ nation in the world with 800 million Indian users. 5G and the largest rural broadband connectivity network project at BharatNet will have 1.2 billion Indian users constituting the single largest presence of the global internet. He further said that we also expect further technological innovations as well as updated regulatory policies to remain relevant. The deep involvement by all stakeholders will be the third leg of this Global Standard Cyber Law Framework that we hope will catalyze the Indian internet and the economy, he added.

The MoS said that India now has a tremendous powerful offering, identity authentication to a very diverse and rich suite of applications, and improved accessibility to the internet to countries in the Global South which have not been able to step up and create the same sort of pace of digitization of the economy is an internetization of their economies. He further said that during the G20 Presidency, the Prime Minister declared that he will be open to India offering that platform to all those nations in the Global South that want to transform their digital economy and their governance model as India. The multistakeholder architecture of the Indian internet happened after a lot of effort. In the next few years, this multistakeholder engagement must go beyond the intellectual academic discussion to ensure the internet grows and innovation grows while keeping both safe and trusted and accountable for all the billion digital nagriks of India, he added. 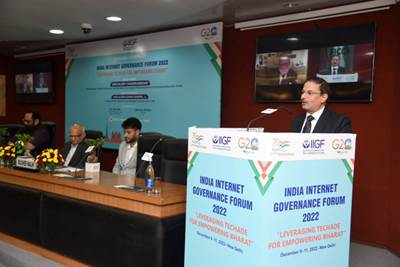 Speaking about the second edition of IIGF, the Secretary, MeitY, Shri Alkesh Kumar Sharma said that the Digital India program augments India’s mission with digital literacy initiative skills with an exemplary indigenous success story, which has become a world story with technical progress shaping new India. The theme of IIGF 2022 “Leveraging Techade for Empowering Bharat” is appropriate as India is looking at the major initiative of connecting the unconnected ones with best internet connectivity. He further said that we are looking at building laws which ensure the privacy, protection, data, security and safety of our citizens. We are also looking at how to create a trillion-dollar digital economy in the next three years, he added.