India is for promoting universal sense of oneness: Arjun Munda

New Delhi : The Union Minister for Tribal Affairs, Shri Arjun Munda today stated that India’s vision is to promote a universal sense of oneness and work together to shape a new paradigm of human-centric globalisation where no one will remain behind. While addressing the plenary session of the first meeting of G20 working group on Global Partnership for Financial Inclusion at Biswa Bangla Convention Centre, Shri Munda stressed on the necessity of just and equitable development of all. Addressing a gathering of more than 1,800 students from various corners of the State, the Union Minister spoke on India’s vision of ‘Vasudhaiva Kutumbakam’, he said, we strive for a human centric globalisation, where no one is left behind. Shri Munda said, the process of financial inclusion paves the way for currency management, which enhances the saving potential, leading to social security and ensuring quality life. He urged the students to have financial literacy in the proper way, so that they don’t get duped in the long run. He also spoke in favour of a concept of globalisation, where no one will be left behind. 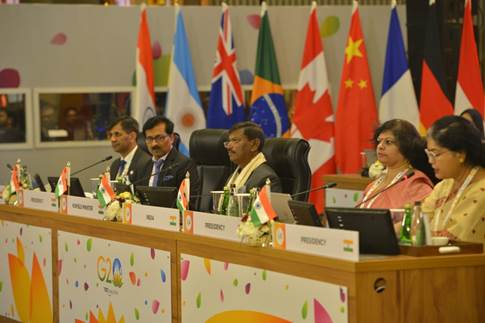 The minister highlighted the sacrifices of our forefathers to liberate India from the shackles of British tyranny and help the country shine. He said, when the country attains 100 years of independence (Amritkal), let there be no differences at all. Hosting the G20 Summit, he said, is an historic opportunity for our country, being the premier forum for international economic cooperation representing around 85% of the global GDP.

Earlier, addressing the G20 working group meeting in presence of delegates from other G20 nations and senior officials from Department of Economic Affairs, Union Ministry of Finance and Reserve Bank of India, Shri Munda stated that India has rich ancient sustainable traditions to nudge consumers and in turn markets to adopt environmentally conscious practices. He said, in the last many years we have destroyed our earth and environment. This had an adverse impact on our climate and ecology. There must be a global vision for ecological safeguard, or else, we will sink together.

Mentioning the visions of Prime Minister Shri Narendra Modi and focusing on the brighter sides of women empowerment, Shri Munda stated that it is time for the world to reorient the focus from women development to women led development.

Union Minister also stressed on the necessity of financial inclusion for people’s economic empowerment and pointed out that it is a bedrock of our development strategy, and delivering financial services to the last mile, the poorest of the poor has been one of the key priorities of the Indian government right from the outset.