India crosses a Landmark Milestone; Active caseload below 6 lakh for the first time after 85 days

Presently the active cases comprise only 7.35% of the total positive cases of the country standing at 5,94,386. This has strengthened its trend of steady decline.

The trajectory of the active caseload across different States/UTs has been diverse indicating their efforts and gradual progress in their fight against the global pandemic. 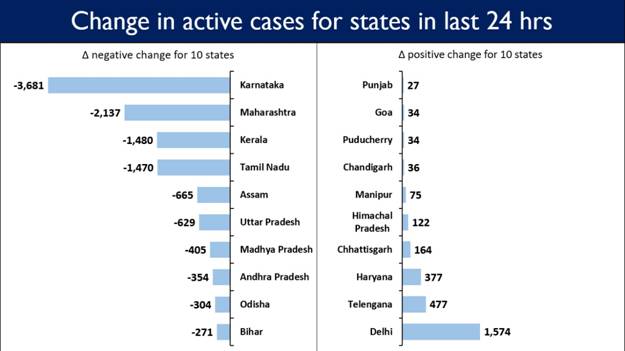 57,386 patients have recovered and discharged in the last 24 hours whereas the new confirmed cases are 48,648. The national Recovery Rate has progressed to 91.15%.

80% of the new recovered cases are observed to be concentrated in 10 States/UTs .

78% of these are from 10 States and UTs. Kerala is still reporting a very high number of new cases with more than 7,000 cases followed by Maharashtra and Delhi with more than 5,000 cases each. 563 case fatalities have been reported in the past 24 hours. Of these, 81% are concentrated in ten States/UTs.

India is a mother of all democracy, says Prime Minister Narendra Modi addressing the…